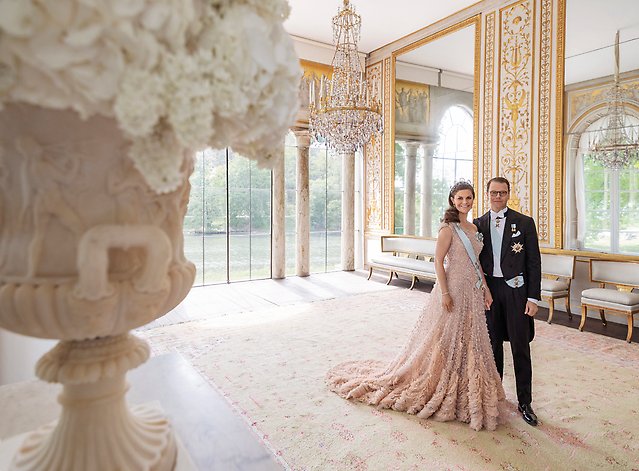 The Swedish Royal Court has released new portraits of Crown Princess Victoria and her husband, Prince Daniel, to mark their 10th wedding anniversary. The release of the series of eight photographs is part of a new website that has been created to celebrate the wedding anniversary.

On Friday, the 19th of June, Crown Princess Victoria and Prince Daniel will have been married for a decade. To celebrate their 10th wedding anniversary, the Swedish Royal Court has distributed a series of eight new portraits of the Crown Princess Couple. The photos were taken by the Swedish photographer Elisabeth Toll at Gustav III’s Pavilion at Haga Park, located next to their home Haga Palace. It is believed that the pictures were snapped earlier this month.

In the new portraits, the Crown Princess and Prince are seen wearing three different outfits. In three of the original pictures, Crown Princess Victoria can be seen re-wearing her blush Elie Saab gown which she wore on the evening before her wedding. She paired the evening gown with Princess Sybilla’s Tiara, which she recently revealed to be her favourite tiara. This tiara belonged to Victoria’s grandmother, Princess Sybilla.

In another photo, the Crown Princess is wearing a new, dark blue H&M Conscious gown and the Baden Fringe Tiara. The blue sashes both Victoria and Daniel are wearing are part of the highest Swedish Royal Order, the Order of the Seraphim.

In the other portraits, the Crown Princess Couple decided to wear more “casual” outfits. Prince Daniel is pictured in a smart blue suit while Crown Princess Victoria opted for a white dress.

In addition to the release of the new images, the Royal Court also published a new website to mark the 10th wedding anniversary. Through the new site, one can relive the wedding in texts and photographs. Another part of the website focuses on the work and causes the Crown Princess Couple has been supporting for over ten years.

As part of the celebrations, the Swedish Royal Court has also asked all those who witnessed the wedding of the Crown Prince Couple, whether in real life in Stockholm or on the television, to share their experiences. There is also the possibility to add photos or documents that you might have taken on the day. The best stories and pictures will be shared across all of the Palace’s social media channels.

The online celebrations of the 10th wedding anniversary of the Crown Princess Couple will continue throughout the week.