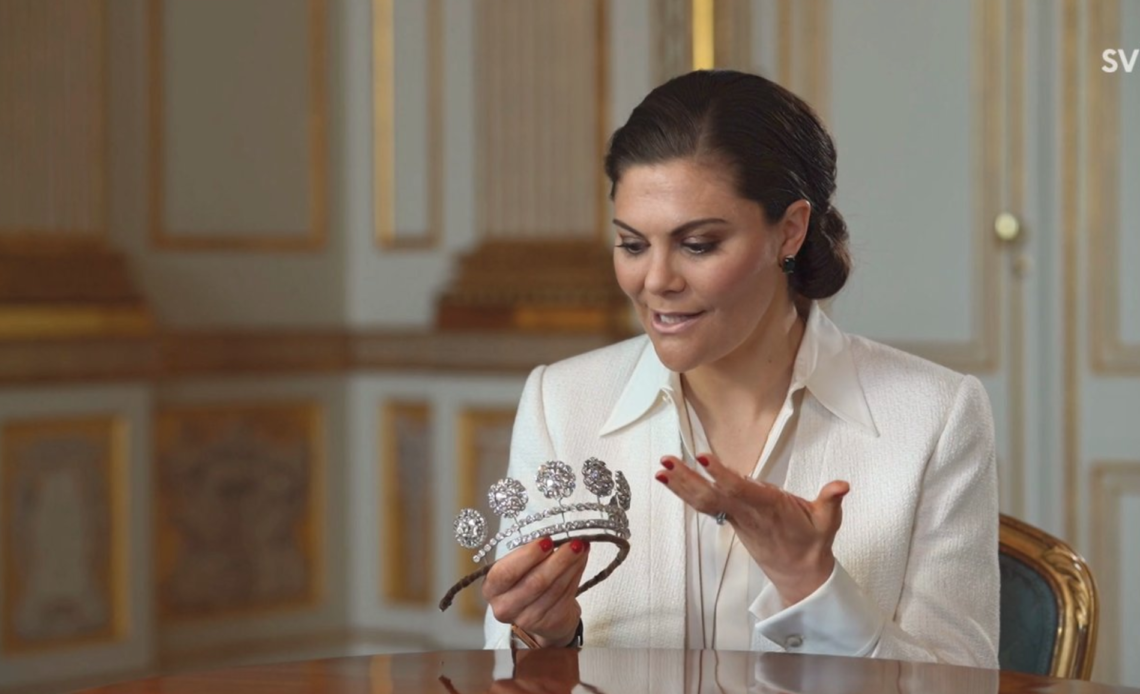 In a two-part documentary about the Swedish Royal Jewels, both Queen Silvia and Crown Princess Victoria have spoken about wearing some of the oldest and most precious jewellery in the world. The Queen and Crown Princess of Sweden also revealed their favourite tiaras.

Her Majesty Queen Silvia, Crown Princess Victoria and Princess Christina -King Carl XVI Gustaf’s sister – have participated in a documentary about the Swedish Royal Jewels, created by the Swedish channel SVT. Throughout the documentary, the creator studies the history of the gems and tries to discover the origin of the royal jewellery and how they found their way to Sweden. Never before has anyone been allowed to film and document these jewels from up-close.

In the series, both the Queen and Crown Princess talk about their own experiences with the royal jewels and about the value they have for the family. Crown Princess Victoria revealed that she is not allowed to wear all of the jewels of the Royal Collection. Her father, King Carl Gustaf, also gives instructions on who can wear what.

Crown Princess Victoria stated: “It’s part of a tradition. Who wears what at what point? There’s jewellery that I think is reserved for my mother to wear. Not for me. (…) For example the more large and “Queen-like” tiaras.”

Some insight information was also given on how the royal ladies divide the various jewels when they are all to attend an important event such as the Nobel Prize ceremony.

Queen Silvia said: “It [the choice of jewellery] depends on the fabric, colour and style of the dress that one will wear. Sometimes we adapt the jewellery to the dress, sometimes the dress needs to be adapted to the jewellery. (…) We try not to wear the same colour altogether. They [Victoria, Sofia and Madeleine] often ask me what I would like to wear and then I’ll ask what they would like. It’s a family conversation. We try to coordinate so it will be beautiful.”

Crown Princess Victoria also shed light on another aspect of wearing these stunning royal jewels. Her Royal Highness shared that it is a great responsibility to wear such expensive jewellery. After having worn an item from the Royal Collection, the Crown Princess personally inspects whether all the diamonds and gems are still in place. The Royal Court also has a jeweller who is responsible for the reparations and check-ups of these jewels.

The royal ladies were also asked about what their favourite piece of jewellery was to wear. Her Majesty’s favourite is the Leuchtenberg Sapphire Tiara and the accompanying parure. Queen Silvia loves this particular tiara so much because it is beautiful and easy to transport and comfortable to wear.

When Crown Princess Victoria was asked to share her favourite jewel, she gave a surprising answer. Her Royal Highness stressed that she has a great respect for all of the jewels and likes to wear them all. However, she has a little bit more affection for Princess Sybilla’s Tiara which is also known as the Connaught Diamond Tiara.

The tiara came to Sweden in 1905 when Princess Margaret of Connaught married the Swedish King. She received this tiara as a wedding present from her parents, the Duke and Duchess of Connaught. Later, her daughter-in-law, Princess Sybilla of Sweden – who was the mother of King Carl XVI Gustaf – often wore the tiara.

Crown Princess Victoria, who never knew her grandmother, thus feels a special connection to her grandmother’s tiara. Furthermore, Princess Sybilla’s Tiara was also given to Queen Silvia to wear for her first tiara appearance on the evening before her marriage to the current King of Sweden. It was the King’s sisters, like Princess Christina, who asked Silvia to wear the tiara to welcome her in the family.

Even though Princess Madeleine of Sweden did not participate in the documentary, it is not difficult to guess which tiara she prefers. Her Royal Highness has been seen wearing the Modern Fringe Tiara many times. As opposed to the tiaras that were previously discussed, this tiara is not part of the Royal Family’s jewel collection but in private possession. There is no information available on the origin of the tiara, but it was first used by Queen Silvia in the late 1980s. Today, the tiara is in the possession of Princess Madeleine herself as she received the tiara from her parents as a wedding present. The Modern Fringe Tiara can also be worn as a necklace.

Another privately owned tiara is Princess Sofia’s tiara which she received from her parents-in-law as a wedding present in 2015. Ever since the Princess has been seen wearing the tiara multiple times. The tiara is very versatile as the top gems can be changed. At her wedding, Princess Sofia wore the tiara with emerald toppers, but these toppers can be changed out with pearls or turquoises.