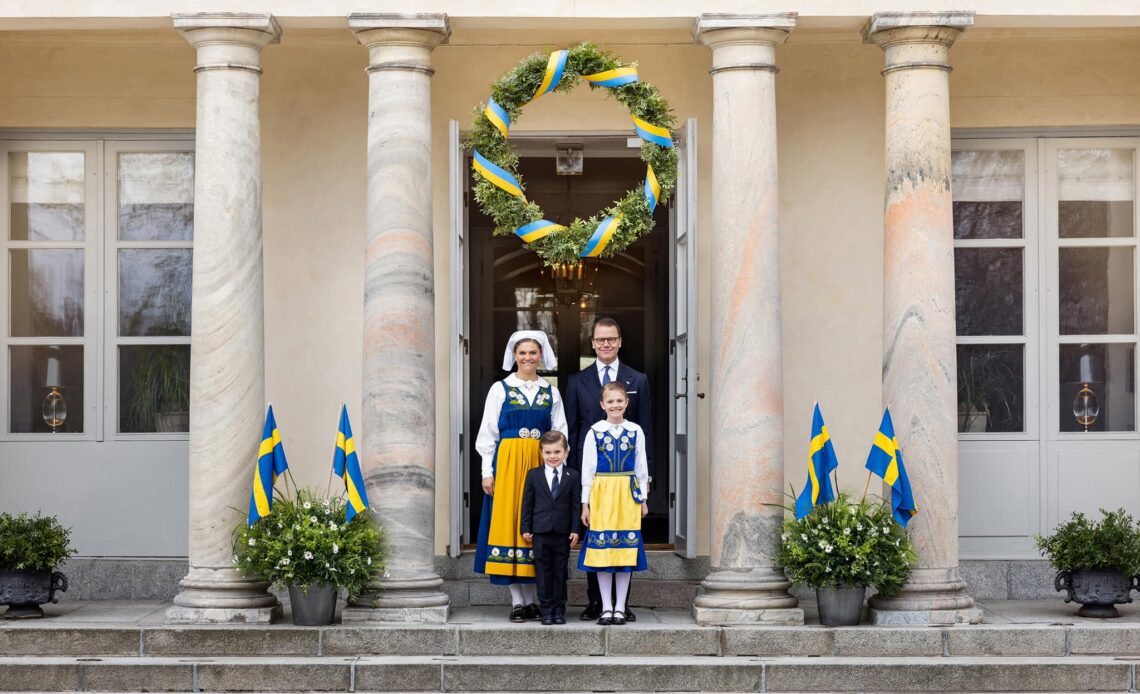 The photos were taken by Linda Broström and feature Crown Princess Victoria and Princess Estelle in Sweden’s white, yellow and blue national costume.

The family also released a short video, showing them decorating Haga Palace with Swedish flags and wishing everyone a happy national day.

Princess Estelle, Duchess of Östergötland, was born on 23 February 2012 at Karolinska University Hospital in Solna, Sweden. Prince Oscar, Duke of Skåne, was born on 2 March 2016 at the same hospital. They are second and third in line, respectively, to the Swedish throne.

Due to the ongoing global health emergency, the National Day festivities are scaled down again this year. Only King Carl XVI Gustaf, Queen Silvia, Crown Princess Victoria and Prince Daniel are participating in events today.

The King will digitally open the exhibit Daisy. Crown Princess Margaret 1882–1920 at the Royal Palace at 10 am on the Royal Family’s social media channels. The exhibit will be open at the palace from 6 June to 30 September. His Majesty will later deliver a speech to the Swedes with the Queen by his side from Logården in the Royal Palace. His remarks will be aired on SVT 2 at 20.00.

In the evening, Crown Princess Victoria and Prince Daniel will represent the King and Royal Family at the events at Skansen. The Crown Princess will hand out the flags this year on behalf of King Carl Gustaf. Celebrations begin at 20.00 and will be aired on SVT 2. Usually, Princess Estelle attends the events at Skansen, but it is unknown if she will accompany her parents due to the current situation.

Following tradition, National Day will conclude with the Army Music Corps performing a tattoo from Logården. The King, Queen, Crown Princess, Prince Daniel, Prime Minister Stefan Löfven, and Speaker of the Riksdag, Andreas Norlén, will attend the ceremony that will be broadcast around 21.30. Like the other events, it will also be on SVT 2.