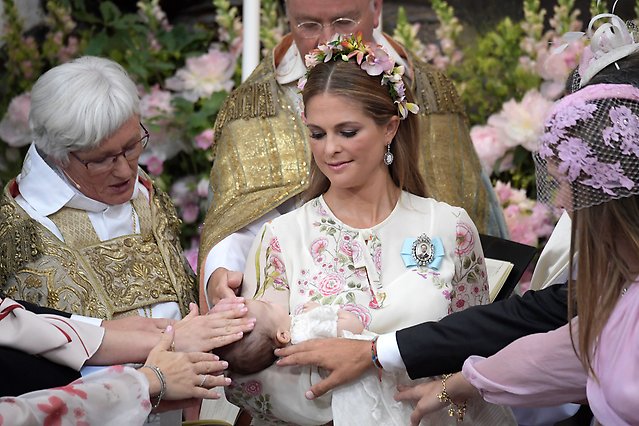 Princess Adrienne of Sweden, the third child of Princess Madeleine and her American-British husband Chris O’Neill, was christened into the Church of Sweden this afternoon in the Royal Chapel of Drottningholm Palace. It was all televised live on SVT.

In attendance today was King Carl XVI Gustaf, Queen Silvia, Crown Princess Victoria, Prince Daniel, Prince Oscar, Prince Carl Philip, Princess Sofia, Prince Alexander, Prince Gabriel, Princess Madeleine, Chris O’Neill, Princess Leonore, Prince Nicolas, Princess Adrienne, the King’s three sisters (Princess Margaretha, Mrs Ambler, Princess Birgitta, Princess Désirée, Baroness Silfverschiöld and Princess Christina, Mrs Magnuson) and the family of O’Neill alongside members of official Sweden and the government. The full guest list can be viewed here. However, although listed to attend, Princess Estelle (the daughter of the Crown Princess Couple) was not in attendance with her family. She was pictured arriving with her parents and siblings to Drottningholm this morning, and the Court explained that she was ill and unable to attend.

Guests began arriving around 11 am before the Royal Family’s arrival just ahead of Princess Madeleine, Chris O’Neill, Princess Leonore, Prince Nicolas, Princess Adrienne and her godparents who arrived at noon.

Archbishop Antje Jackelén presided over the noon ceremony that was in both English and Swedish. Jackelén was assisted by the Chief Court Chaplain Bishop Johan Dalman and Pastor of the Royal Court Parish Michael Bjerkhagen. Princess Hedvig Elisabeth Charlotta’s crown was at the altar.

Chris O’Neill announced her name in the church and then read a prayer. Mark 10: 13-16 was next read by Adrienne’s godmother, Natalie Werner, in Swedish. The Archbishop then said a prayer for Adrienne while the Princess’s godparents were at the altar with her and her parents. “All Things Bright and Beautiful” was later performed by the choir and congregation.

Young Prince Gabriel, not yet one-year-old, began to cry at one point, and Princess Leonore went to check on him while he sat on Prince Carl Philip’s lap. Princess Leonore was to pour the water in the baptism font with her cousins alongside her. She was a bit shy, as were her cousins; therefore, Crown Princess Victoria and Princess Sofia accompanied Prince Oscar and Prince Alexander, respectively. O’Neill’s oldest niece (and Adrienne’s godmother) also gave a reading from Galatians in English during the service.

Four-year-old Leonore is known to have a lot of energy, and at one point, took off her shoes and sat and played temporarily on the floor before her grandfather, the King, presented her baby sister with her tiny Order of the Seraphim. Later, Prince Alexander left his seat to go sit on his grandmother, the Queen’s lap, as well.

Little Adrienne was calm for most of the service, but during the Archbishop’s remarks, she began to cry – much like her brother, Prince Nicolas’s during his christening in 2015.

As the christening took place on Princess Madeleine and Chris O’Neill’s fifth wedding anniversary, the Archbishop congratulated the couple in both English and Swedish during her remarks. Princess Leonore was christened on this day four years ago, as well.

Yesterday morning, her godparents were announced as Miss Anouska d’Abo, Mrs Coralie Charriol Paul, Mr Nader Panahpour, Baron Gustav Thott, Mrs Charlotte Kreuger Cederlund and Mrs Natalie Werner. d’Abo is O’Neill’s oldest niece, and Panahpour is a friend of O’Neill. Paul is a jewellery designer, and Thott is married to Princess Madeleine’s best friend, Louise who is a godmother to Princess Leonore. Cederlund and Werner are also friends of Madeleine.

Adrienne wore the antique christening gown first worn in 1906 like her grandfather, mother, aunt, uncle, cousins and siblings before her. Water from a source on the island of Öland was used in the ceremony, following the tradition set by the King and Queen for the Crown Princess’s christening. The guards outside the Royal Chapel were from the Life Guards who wore a “dress uniform of 1886 with its plumed bicorne hat and rifle (old Svea Life Guards’ uniform),” according to the Royal Court.

After the ceremony, the newly christened Princess, her family and godparents appeared outside the Royal Chapel to pose for photos. They then went to Drottningholm Palace where the King and Queen hosted a private reception and lunch. The proud parents welcomed their guests while little Adrienne laid in Karl XV’s cradle.

Madeleine and Chris have asked that instead of gifts well-wishers donate to the World Childhood Foundation and Min Stora Dag. People can also send a greeting on the Royal Family’s official website here to the Princess Family.

Official christening photos are expected in the coming days.

Princess Adrienne Josephine Alice of Sweden, Duchess of Blekinge, was born on 9 March in Danderyd Hospital in Danderyd, Sweden. The two-month-old is tenth in the line of succession to the Swedish throne. She is the third granddaughter and seventh grandchild of King Carl XVI Gustaf and Queen Silvia.

The Princess and her family live in London, where her father is employed. However, they usually spend a significant portion of the summer in Sweden.