Parts of the Swedish Royal Regalia have been stolen. Two royal crowns of King Karl IX and Queen Kristina, as well as a royal orb, have been stolen from Strängnäs Cathedral on Tuesday afternoon. The two crowns are the burial crowns from 1611. The items were originally interred in Karl IX’s grave but were later exhumed and put on display.

Police have surrounded the city and are pursuing the thieves by helicopter, boat and cars. To the Swedish television channel, SVT police spokesperson Thomas Agnevik said: “I have talked to a person at the county administrative board that says that it is not possible to put an economic value on this, these are invaluable objects of national interest”.

The suspects stole the regalia from Strängnäs Cathedral around lunchtime on Tuesday. Two men were seen jumping into a motorboat close by the church. Police are, therefore, also patrolling by boat in the nearby area.

Police spokesperson Thomas Agnevik said: “We are looking for a small and open motorboat. We have some different information about how exactly the boat looked. We are now examining all the tips we receive.”

He continued: “By boat you can reach Mälaren, Köping or Arboga in the west, or Västerås, Eskilstuna or Stockholm if you drive east. We direct our search in all these directions”. 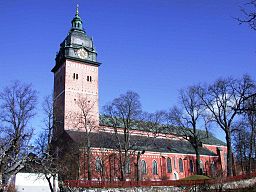 Karl IX was King of Sweden from 1604 until his death in 1611. He was the youngest son of King Gustav I and his second wife. He was the uncle of Sigismund who at one point was king of both Sweden and Poland.

Strängnäs Cathedral is a cathedral in Strängnäs, Sweden, since the Protestant Reformation the seat of the Lutheran Diocese of Strängnäs. Construction work began about 1250. New parts came into the 1300s and 1400s, but the original tower was first built in the 1740s. The church tower is 75 metres high.