10 years on: Take a look back at Crown Princess Victoria and Prince Daniel’s wedding day 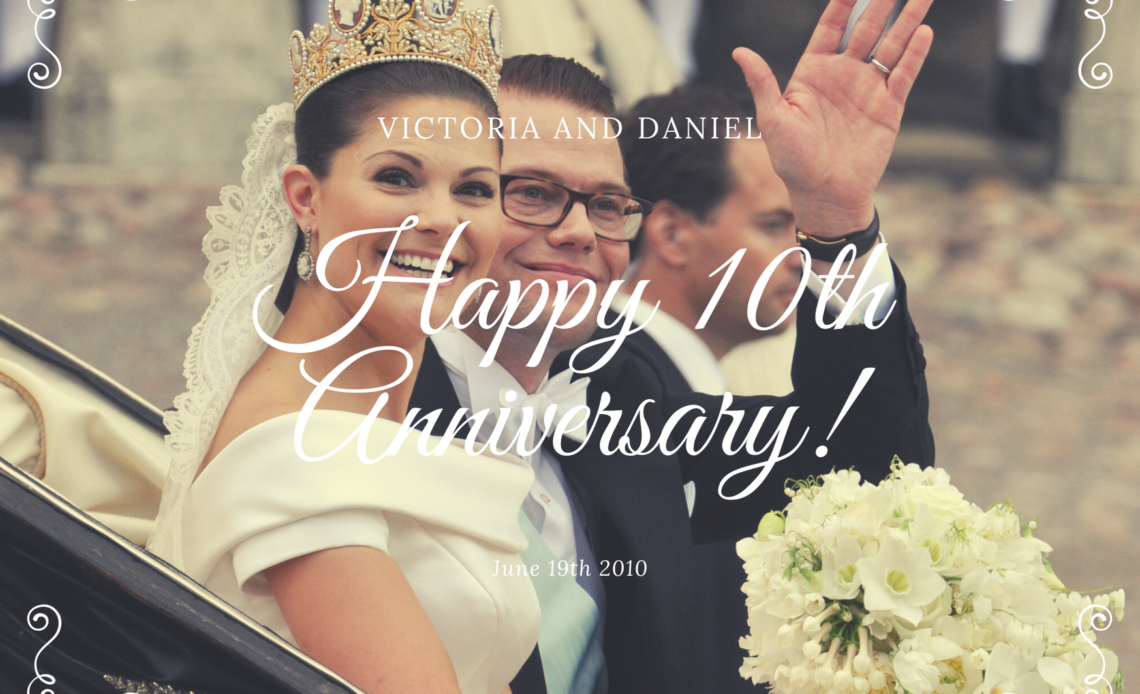 Happy 10th wedding anniversary to Crown Princess Victoria and Prince Daniel of Sweden! To mark the occasion, we are taking a look back at their wedding ten years ago today:

Victoria and Daniel chose to wed on the 34th anniversary of Victoria’s parents’ marriage at Stockholm Cathedral, and there was a bit of controversy before the wedding regarding the bride coming down the aisle.

Swedish tradition states that the bride and groom enter the chapel together, but Crown Princess Victoria wanted to be escorted by her father. Many saw this as an outdated custom where a daughter is the property of her father and is handed over to her husband; however, the Royal Court argued that it was a symbol of the King escorting the heir to the man who had been accepted into the Royal Family.

In the end, a compromise was made. King Carl XVI Gustaf walked his daughter partially down the aisle before handing her over to walk with Daniel the rest of the way to the altar.

The wedding ceremony was conducted by the Archbishop of Uppsala, Anders Wejryd at 15:30. He was assisted by the Royal Court Chief Chaplain, Lars-Göran Lönnermark and the Bishop of Lund, Antje Jackelén.

Music was headed by Gustaf Sjökvist, and both Agnes Carlsson and Björn Skifs concluded the ceremony with a performance of the Crown Princess Couple’s official wedding song “When You Tell The World You’re Mine.”

In total, 1,200 people attended the ceremony; you can read about the royal guests here. An estimated 500,000 lined the streets to celebrate the couple, and it was the largest event to be aired on SVT in history.

After the ceremony, Victoria and the newly titled Prince Daniel (who was given his Order of the Seraphim sash immediately after the service) exited the chapel under crossed swords before taking a carriage ride through the streets of Stockholm. They then stepped aboard the royal barge Vasaorden en route to the Royal Palace where the reception took place.

Upon arrival at the Royal Palace, the newly married couple waved to the thousands who’d come out to greet them; they were surrounded by their families, foreign royals and friends. The wedding banquet, decorated with pink and white flowers, was then held in the evening in the Hall of State.

He shared a story of when she had to travel abroad and how she wrote him a letter for each day she would be gone. Daniel later stated: “Once upon a time, the young man was perhaps not a frog in the beginning of the fairytale first told by the Grimm brothers, but he was certainly not a prince. The first kiss did not change that. His transformation was not possible without the support of the wise King and Queen, who had ruled the kingdom for many years, and who were full of wisdom, experience and had good hearts. They knew what was best, and guided the couple with a gentle hand, generously sharing all their valuable experience.”

The King also spoke during the banquet and paid tribute to his wife on their 34th anniversary. Olle Westling, the father of Prince Daniel, also gave remarks.

The couple had an 11 tiered organic wedding cake that was a gift from the Swedish Association of Bakers and Confectioners. It featured four leave clover designs and chocolate wafers on each layer.

Dancing followed the banquet meal in the White Sea Ballroom. Celebrations continued until the early morning.

Like the wedding ceremony, the reception was also aired live on SVT.