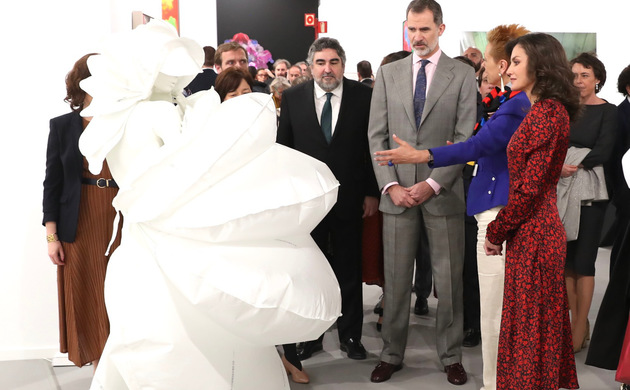 The international contemporary art fair is viewed as one of the premier art fairs on the international circuit and is held each February in Madrid. ARCOmadrid, which started 26 February and will run through 1 March, includes a “careful selection of national and international galleries” and the King and Queen toured a number of them Thursday.

Upon arriving, the royal couple joined the president of the Executive Committee of IFEMA, Clemente González Soler, along with the mayor of Madrid and a number of other national and local authorities who toured the exhibit with them.

The fair, which receives more than 1000,000 visitors, includes 209 galleries from 30-plus countries, and Spain’s presence is growing.

This year, the participation of Spanish galleries has registered a slight increase to include a total of 70, Casa Real announced, which represents 33 per cent of the total at ARCOmadrid.

In this group, galleries from places outside of Spain’s major cities “allow broadening the perspective and knowing interesting proposals from other parts of the country.”

The central theme for the 2020 fair is “It’s Just a Matter of Time,” and the king and queen learned about the various works on display and how they fit into this concept.