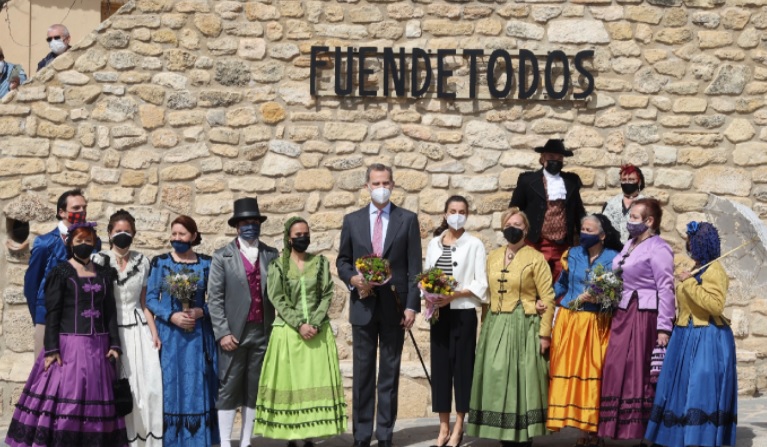 King Felipe and Queen Letizia have travelled to a tiny town in the heart of Aragon to celebrate the work of a Spanish artist whose impact on the development of modern painting was huge. The royals spent a day in Fuendetodos to mark the 275th anniversary there of the birth of Francisco de Goya.

The King and Queen of Spain arrived in the town, which has a population of around 200 people, to oversee some of the commemorations linked to the anniversary. They were greeted by the Mayor of Fuendetodos who symbolically handed King Felipe the mayoral baton, indicating that the royal held sway during his visit. The royals then headed into the house where Goya was born, on March 30th 1746, and which is now a museum.

Tourism linked to Goya brings a lot of money to the local economy and before the pandemic, around 25,000 people visited every year to see the origins of a man celebrated as one of the great portrait artists of the late 18th and early 19th centuries. The King and Queen of Spain were given a tour of the house as well as the exhibitions there and were also shown the neighbouring Ignacio Zuloaga Exhibition House.

Their visit was also focused on the ongoing celebration of the arts in Fuendetodos and they toured the Antonio Saura Engraving Workshop where they watched resident artist, Pascual Adolfo López Salueña, who explained the processes involved in the creation of his pieces. A visit to the local Engraving Museum followed.

Groups of wellwishers had gathered throughout the town and King Felipe and Queen Letizia met many of them in walkabouts, posing for photographs and signing autographs.

Their visit concluded with a meeting of the Goya Foundation in Aragon’s Trustees, overseen by Felipe and Letizia, which discussed the ongoing plans to mark the anniversary of the artist’s birth. In his address, King Felipe spoke of the sense he had been given of the importance of Goya’s work. The artist is often called the last of the Old Masters and the first of the modern Europeans and the King of Spain said he had been struck in his visit by the evocation of a ”painter who more than two centuries ago knew how to reflect with extraordinary fidelity the reality of a society, of an era, in short, the soul of a people in one of the most turbulent times in its history. ”

King Felipe also reflected on the work of local officials in bringing history alive and encouraging tourism and trade as a result, telling them”Together, you convey messages that value both urban and rural environments, while offering opportunities for entrepreneurship and the talent of our citizens. From this small enclave of the Aragonese rural environment, we can certainly appreciate the calling to respect our roots.”

King Felipe and Queen Letizia returned to Madrid following their engagements. Usually the Spanish Royal Family heads to Mallorca for the Easter holidays but travel restrictions inside Spain mean they are likely to remain in the capital in the coming days and weeks.