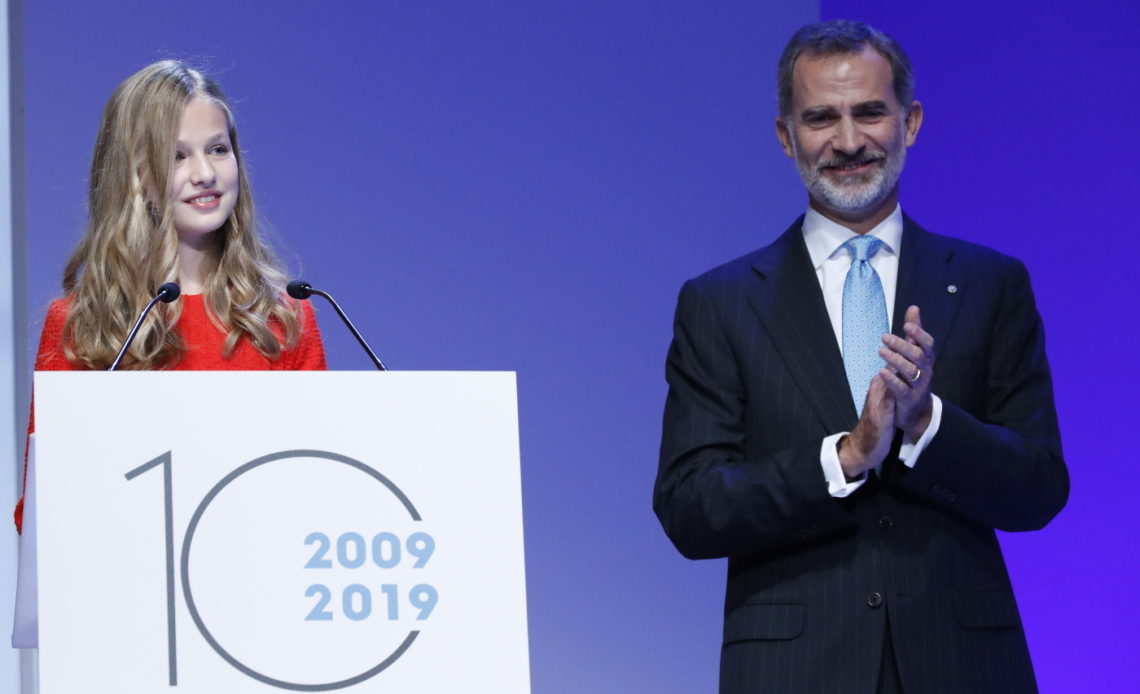 Leonor attended alongside her parents, King Felipe and Queen Letizia and her sister, Infanta Sofía to celebrate the tenth anniversary of the Princess of Girona Foundation. They stood on the stage beside her as she presented each of the awards last evening at the Palacio de Congresos de Catalunya.

The Princess of Girona impressed and surprised the audience by delivering part of her speech in Catalan – the local language of Catalonia – telling the crowd, “This land, Catalonia, will always occupy a special place in my heart.”

Spanish media reported that the Princess’s accent and intonation revealed how long she’s been studying and practising the language.

She also said in Catalan, “Since childhood, my sister, the Infanta Sofía, and me, our parents have always told us about Girona and Catalonia always with real affection. Thanks to them, we know many things about Catalan history and culture.

“As Princess of Girona, I want to honour the Foundation as it deserves. And proudly bear its name throughout Catalonia, for the rest of Spain and worldwide.”

Her Royal Highness also congratulated the winners saying, “You form a great family of talent, effort and hope that will continue to grow thanks to the generosity and support of so many and thanks to your commitment. You are an example for young people from all over Spain and I admire you a lot because you represent the best values ​​that the Foundation promotes from Catalonia.”

She also spoke two lines in perfect English with a North American sounding accent, hinting at the summers she has spent in the United States, saying, “I would like to especially thank those who have come from far. Your presence here today is greatly appreciated.” She also made sure to conclude her remarks with a word of thanks in English, as well, saying, “Thank you very much.”

The 14-year-old future Queen of Spain received a standing ovation from the 1,400 in attendance. After her remarks, there was a touching moment as a noticeably proud King Felipe gave his daughter a sweet hug before he took the stage to speak.

King Felipe stressed, “It is the message of commitment to our youth and its future of those who incarnate today the maximum democratic representation of our society; that of a people who decided, more than forty years ago, to meet again to live together and in freedom under democratic principles; recognise themselves in the value of their diversity and confront with loyalty and trust the overcoming of the past and the construction of a modern and advanced society, integrated in Europe and open to the world.”

The event was impacted by protesters against the King who booed, spit on and shoved some people who were attempting to enter the event. Images of King Felipe were burned as people chanted to oust the Borbóns (a last name of the Royal Family).