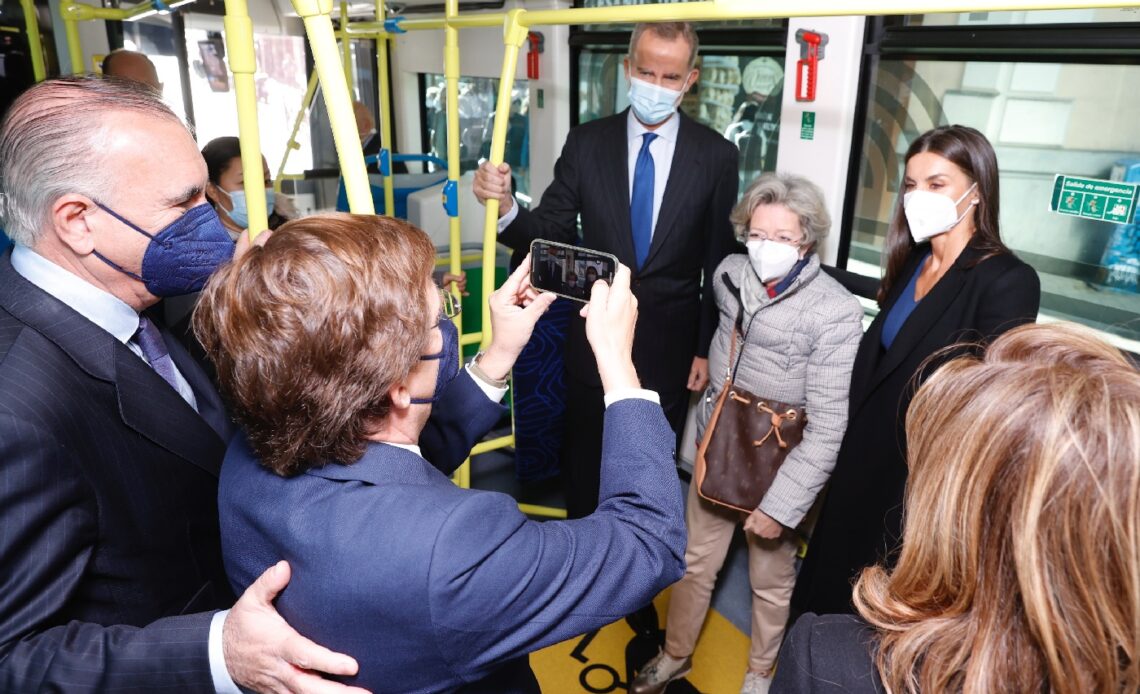 King Felipe and Queen Letizia kickstarted a period of intense work by taking the bus! Their Majesties travelled aboard one of the many surface public transport vehicles to celebrate the 75th anniversary of the creation of the Madrid Public Transport service.

The King and Queen arrived on the morning of 15 November at stop 90 of the 001 line, where they were welcomed by the Minister of Transportation, Mobility and Urban Agenda Raquel Sánchez, the Mayor of Madrid José Luis Martínez-Almeida, the President of the Administration Council of the Municipal Enterprise of Transportations of Madrid Borja Carabante and its Director Alfonso Sánchez Vicente.

King Felipe and Queen Letizia then got on a bus. During their journey, regular users were still allowed to get on and off that bus, making them share their bus ride with the head of state.

After about half an hour of travel, they reached Madrid’s Carabanchel area, where the Municipal Enterprise of Transportation of Madrid (Empresa Municipal de Transportes de Madrid, or EMT) has its Operations Centre.

There, Their Majesties were shown five bus models that were discontinued during the EMT’s 75 years of activity. During the tour of a double decker bus, King Felipe seemed unsure about hopping on, as he seemed to point out to his wife that there wasn’t much head room, eliciting a smile from the Queen. He finally opted to get on but had to sit down once on the second deck because the space was way too small for the 197cm King to stand up.

The buses are part of the EMT’s museum, and the King and Queen got a small tour of it, as well as of the Mechanics and Electricity Areas, before finalising the act by posing for a commemorative photo opportunity with officers and workers from the Enterprise.

King Felipe and Queen Letizia are expected to host Italian President Sergio Mattarella for a State Visit later this week before flying to Sweden for a long-awaited State Visit with their Scandinavian counterparts.