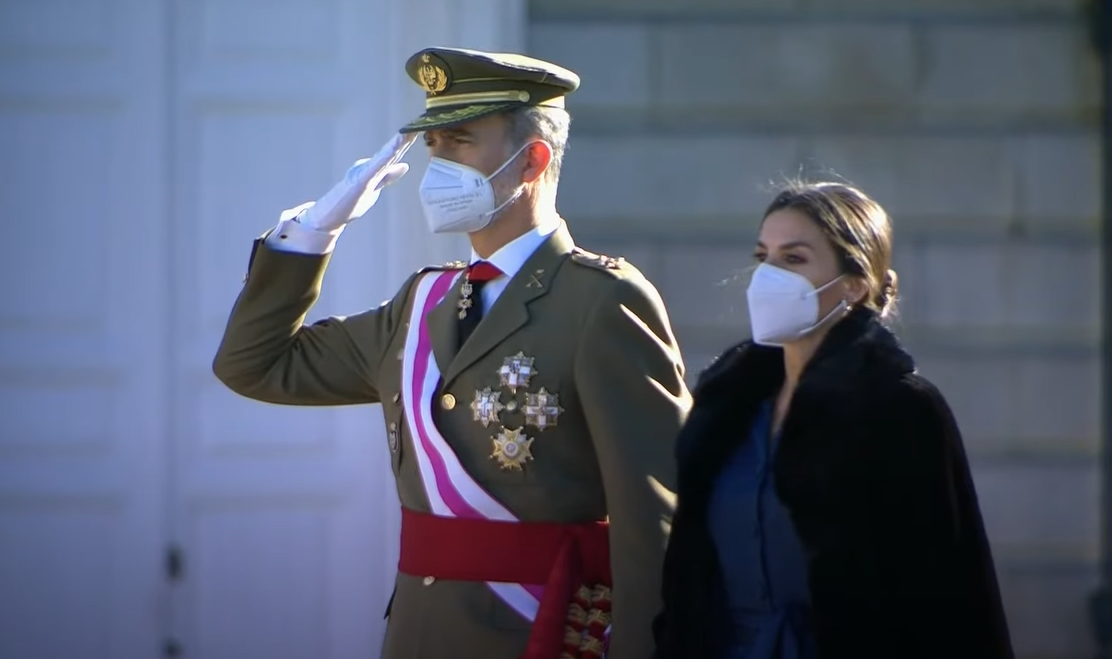 King Felipe and Queen Letizia of Spain kicked off their 2022 agenda by presiding over the traditional ceremony of Pascua Militar, one day after former King Juan Carlos Celebrated his 84th birthday in Abu Dhabi and Princess Leonor reportedly made her way back to Wales to continue her studies at UWC Atlantic.

Shortly after 12pm local time, Their Majesties arrived at the Royal Palace, where they were welcomed by Prime Minister Pedro Sánchez along with other senior politicians and dignitaries.

After stepping on the podium to listen to the National Anthem, Queen Letizia seemed to have lost her brooch while tugging her coat tighter, and Felipe bent down to pick it up. The Queen kept it in her hand before putting it back on her coat for the portion of the ceremony inside the Palace.

At the end of the review, the entire group of authorities made their way inside the Royal Palace for the ceremony, which began by a salute line of military delegations, which paid their respects to the Monarchs.

Following this display, King Felipe honoured 16 members of the Armed Forces, grabbing each of them at the shoulders after pinning the decoration in a sign of closeness and respect.

It was then time for the traditional speeches. The Defense Minister, Margarita Robles, was the first to take to the microphone, and she began by commemorating the 10th anniversary of the official dismantling of ETA – the terrorist organisation – and commemorating the many victims of terror. She continued, thanking all the medical personnel involved in the many sides of the fight against COVID-19, highlighting the role played by the Armed Forces in the process, firstly by welcoming civilians in military hospitals, and now by involving their own medics in the vaccination campaign.

The Minister went on to highlight the biggest efforts of the Armed Forces in 2021, including the Filomena snowstorm, wildfires, the volcanic eruption, and the evacuation of Afghanistan. She also set goals for the future, which included promising the country will invest in the modernisation of the Armed Forces, therefore better performing as an ally, especially in a year that marks the 40th anniversary of Spain’s entrance to NATO.

It was then the turn of King Felipe to take the stage, and he began by remembering the 240th anniversary of the creation of the ceremony of Pascua Militar, moving on to remembering all members of the Spanish society that were lost, either to terrorism, to the pandemic or to Armed Forces missions of peacekeeping around the world. He also thanked the Forces for their “relentless” work in dealing with the extraordinary challenge brought by 2021, as well as continuing to carry on their regular duties, such as the mission in Lebanon. His Majesty concluded his speech by wishing “peace, hope and success for the year ahead”.

The tone of the King’s address was cordial; he always referred to the people in front of him as “companions”, a sign of his familiarity and love with the military world he trained in and is in charge of in his role as Monarch.

Following the Sovereign’s words, Their Majesties left the throne room and the guests orderly split into two groups that exited the room on the two opposite sides.

Pascua Militar is a traditional ceremony that marks the official start of the military year. It dates back to the reign of King Carlos III, when, on the 6th of January 1782, Spain regained control of Mahón, in Menorca, following a siege from the British. As a celebration, the Sovereign ordered all military leadership to gather all of their troops on Epiphany day to convey them his congratulations.

Since then, the tradition has continued – in modern days, the congratulations to the troops come in the form of honours that are handed out by the Monarch to civilians and military personnel that have received them during the previous year.