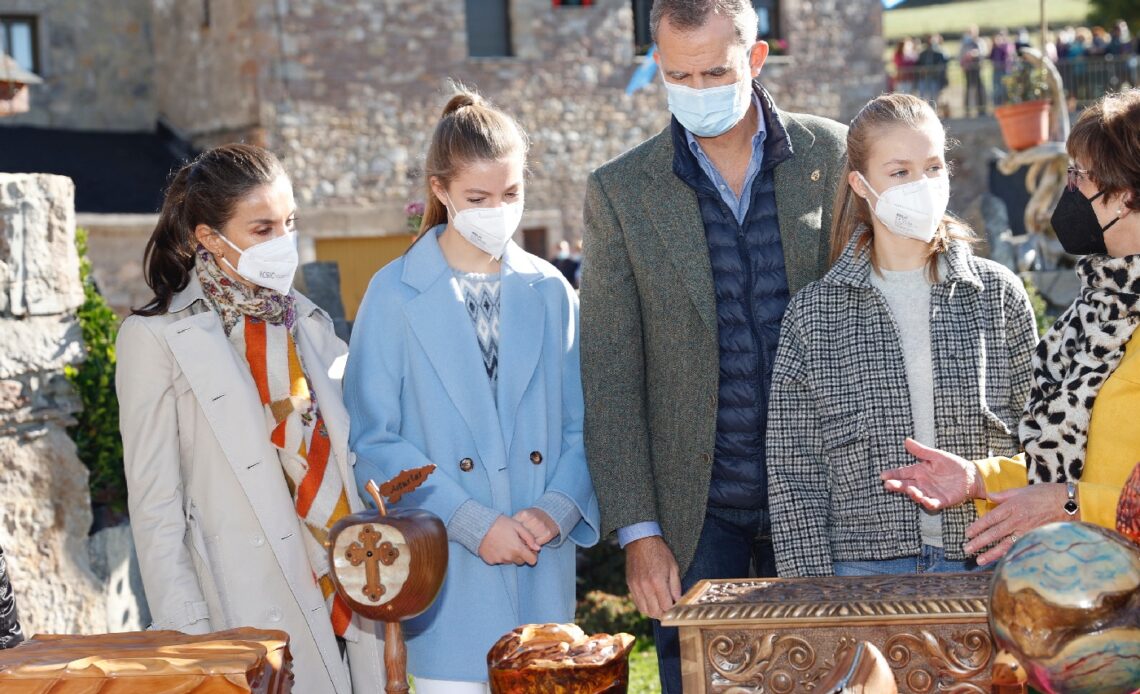 The weekend began cold and sunny in Santa María del Puerto, the small village of cow farmers that was awarded the Asturias Exemplary Village Award for this year.

After the glamour of the previous night’s award ceremony, King Felipe, Queen Letizia, Princess Leonor and Infanta Sofía got on their comfy warm clothes and made the trip up the mountain to the village to get a tour and hand out the prize.

Arriving about 15 minutes later than anticipated in the morning of Saturday, 23 October, the royals were welcomed by cheering crowds, composed of residents of the village and some who travelled from neighboring hamlets.

Their Majesties and their daughters then received a short tour of the local church by the vicar in charge of that and 16 other parishes; he later said to local news outlet RTPA (RadioTelevision Principal Asturias) that they inquired about three objects specifically, one of which was a book of christenings from the late 1800s.

Once they got out of the church, the royals made their way to the day’s big surprise: the viewpoint on the spectacular village surroundings, which, upon the request of the director of the Somiedo natural park, has been named “Mirador de la Infanta Sofía” (Infanta Sofía’s Viewpoint). Her Royal Highness seemed overwhelmed with emotion and was hugged by both of her parents.

After receiving explanations about the Somiedo Natural Park, the Royal Family made their way back towards the centre of the village, stopping to chat with some of the few farmers who still practice transhumance.

It was then time for the institutional portion of the event, which closes the visit. First, the Mayor of Somiedo gave a short speech, highlighting the importance of farming and maintaining a health community to continue conserving the beauty of the natural surroundings of the village.

Then it was time to hear from a resident of Santa María del Puerto, 16-year-old Desiré Fernández, who commented on the importance of such a prize for the residents of the place, and the hope it gives to the younger generation to keep working to balance old and new.

The Princess of Asturias then handed out the diploma to Azucena Lorences, the vice-Mayor of Somiedo and resident of the village, before offering her remarks. She thanked the people of Santa María del Puerto for their warm welcome and the gifts they gave the family, “a symbol”, she said, “of the amazing work the people of this place do.”

She also thanked the children for the drawings they gifted her and her sister “because we know that they have been made with affection.”

It was King Felipe’s turn to speak, and he addressed the crowd remembering the first two times he was in the Somiedo area; the first was in 1990, for the opening of a piece of the natural park, and the second was in 2004, when Villar de Vildas, still in the Somiedo area, received the award, in the first edition of the then-Prince of Asturias Awards in which Felipe was accompanied by his wife, Asturias-born Letizia.

His Majesty then praised the people of Santa María del Puerto for their extraordinary resilience in adapting their life to the challenges of this decade, such as climate change and the lack of infrastructure that was the cause for the isolation suffered by transhumance farmers of previous generations. And yet, instead of leaving, they adapted.

Following the playing of the Asturian anthem by the bagpipe band of Candás and Castrillón, the act concluded, and the royals made their way back to their vehicles, ready to embark on the trip to Madrid.

King Felipe and the rest of his family missed the monarch’s cousin wedding this afternoon. Prince Philippos married Nina Flohr in a religious ceremony, and the Spanish Crown was represented by Queen Sofía, the groom’s aunt, who travelled to Greece after having attended the Princess of Asturias Award ceremony last night, and her daughter, Infanta Elena.