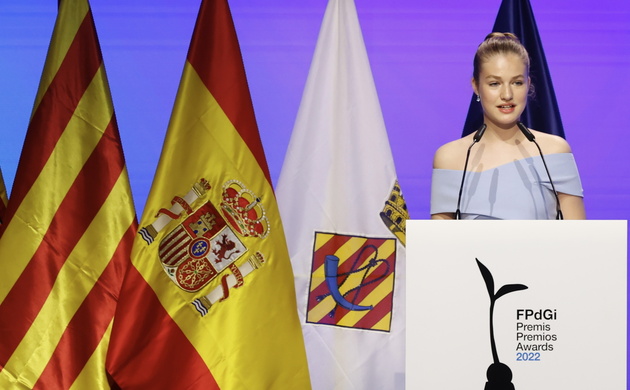 Princess Leonor’s summer vacation from college has started but she is packing in public engagements. She was accompanied by her family at the Princess of Girona Foundation Awards on July 4 2022.

The heir to the throne, who carries the title of Princess of Girona, was joined by her parents, King Felipe VI and Queen Letizia and her younger sister, Infanta Sofia, for the ceremony, after having spent the previous few days attending engagements on behalf of the Princess of Girona Foundation.  Queen Letizia tested positive for COVID just hours later.

In a speech in English, Spanish and Catalan, Princess Leonor praised the five female winners of this year’s Princess of Girona Foundation Awards, noting that “Our five winners represent this objective that the Foundation defends: a model of coexistence in which training, commitment to others and social responsibility make it easier for young people to fully demonstrate their potential, with a real impact on society. And, for the first time, the awards go to five women. My sister Sofia and I have seen your projects and we are admired and impressed. Also grateful!”

The teenage princess added, “I return to Catalonia with the joy of sharing one more time with all of you one more important day is to recognize the strength, the talent, the effort and the commitment of our five awardees of this quest any Our Foundation accompanies and honors these generations of young people who are contributing to the educational, cultural and economic transformation of society, who are an example in their environment and more.”

The Princess of Girona Foundation Awards are presented annually to people between the ages of 16 and 35 who “stand out for their work, their merits and their exemplarity,” from the international community, according to the Foundation’s website.