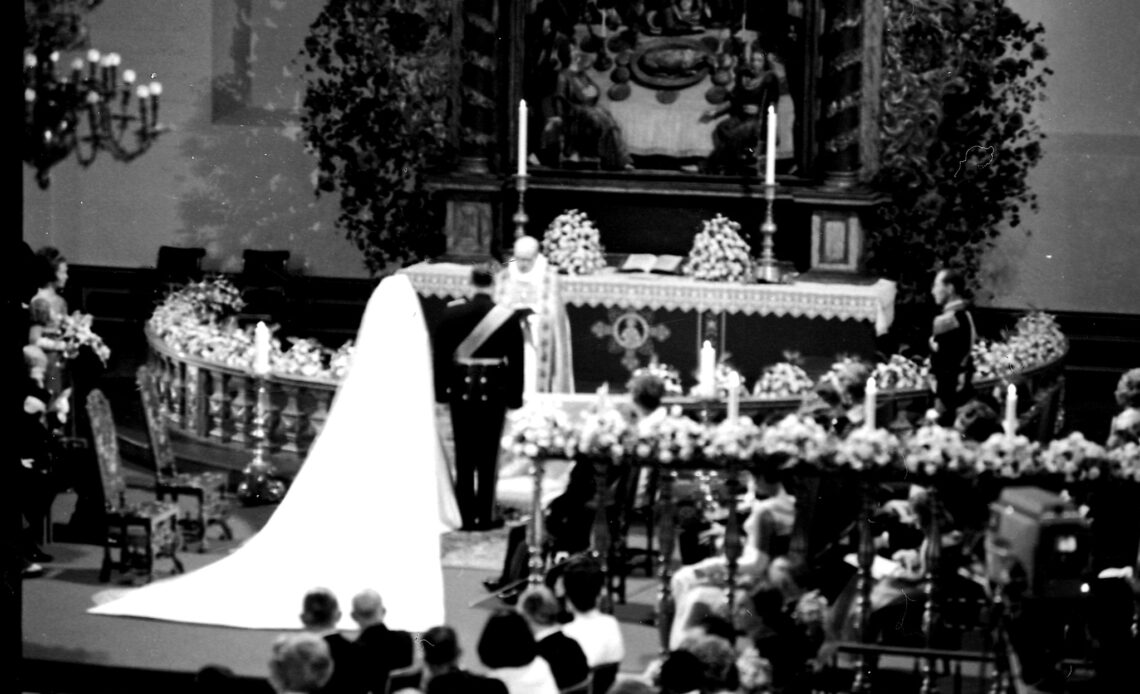 The marriage of Sonja Haraldsen to the future King of Norway, on August 29th 1968, marked a moment of joy in a relationship that had caused huge debate as soon as it was known about. For the bride had no royal blood in a monarchy where princes were expected to wed regally. However, love prevailed and Sonja married the then Crown Prince Harald in front of crowned heads from across Europe. This royal bride needed a majestic wedding dress as she began on a path that would make her, one day, Queen of Norway. Her choice was every bit as stylish as the woman who wore it.

There was quite a bit of pressure on the design of this wedding gown for the bride had studied fashion, tailoring and dressmaking for several years. What’s more, her beloved father, who had died ten years earlier, had been a clothing merchant. Sonja went to the well known Oslo brand, Molstad, for her wedding gown. The result was very simple and very Sixties.

This royal bride wore white. Her gown, made of silk, features a high neck and three quarter length sleeves, all trimmed discreetly with pearls. The fitted bodice fans out into a bell shaped, full length skirt which pools disceetly at the back. The train, a must for all major royal brides, is made of the same material and attaches to the shoulders of the gown. Sonja’s bridal veil was made of white tulle and covered the length of her train. She also chose not to wear a tiara, using a headpiece made of artificial flowers to anchor her veil in place.

Sonja’s dress is striking and elegant, making the bride a focal point at Oslo Cathedral where her marriage ceremony took place and, later on, at the Royal Palace where she celebrated at her wedding reception. The gown has been displayed since and remains a vital part of the fascinating story of the Norwegian who was looked down on by some as a potential royal bride but who went on to be her country’s queen.