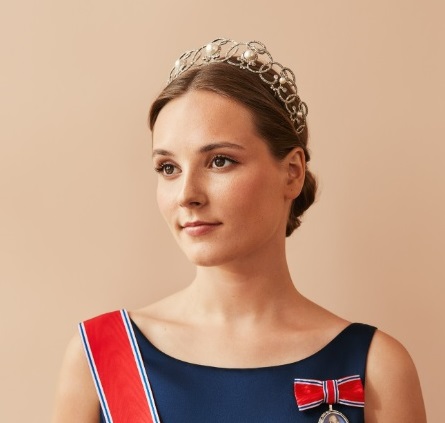 The Norwegian Royal Court has revealed three photos of Princess Ingrid Alexandra in the heirloom tiara she inherited for her 18th birthday in January.

The Princess received the diamond and pearl tiara for her 18th birthday. It originally belonged to her great-great-grandmother, Princess Ingeborg of Sweden. Ingeborg was given the tiara, made by jeweller Boucheron, over 120 years ago by her husband, Prince Carl.

Prince Carl knew that Ingeborg had several tiaras that were heavy when wearing, and so when he saw the tiara on display in Paris, he bought it. He wanted her to have a lighter tiara to wear on important occasions.

The tiara has interlocking diamond circles set in platinum. Prince Carl had the button-style diamond and pearl elements added later to the diadem.

Princess Ingeborg wore the tiara at many events throughout her life and last wore it at King Harald’s 21st birthday celebrations in 1958.

After Ingeborg’s death, Princess Ragnhild, King Harald’s older sister, inherited the diadem and wore it for official events. She died in 2012, and her children gave the tiara to Ingrid Alexandra as a gift.

Princess Astrid remarked that her sister wanted Ingrid Alexandra to have the tiara.

Princess Ingrid Alexandra will wear the tiara for the first time at a public event this evening. Her grandparents, King Harald and Queen Sonja are hosting a gala dinner in honour of her 18th birthday at the Royal Palace.