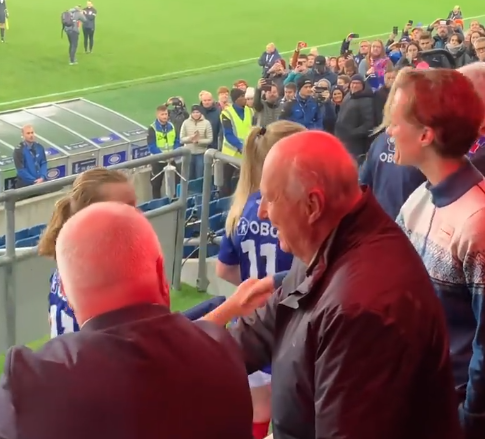 King Harald of Norway has attended the women’s football final for 2021at Ullevaal Stadium. The final was played between the teams from Vålerenga and Sandviken.

It was an even match with many chances for both teams, but it was the Oslo team Vålerenga who got off to the best start. After a shot from player Marie Dølvik Markussen and a free kick from Dejana Stefanovic, Vålerenga led 2-0 at the break. The team from Sandviken chased a chance to catch up in the second half of the match, and after only five minutes played, Marit Bratberg Lund put in a free kick. Nevertheless, it was to be the last goal of the day at Ullevål, and after a penalty kick from Sandviken four minutes before full time, the result ended 2-1 to Vålerenga.

King Harald congratulated the winners and handed out trophies to both teams together with President of the Norwegian Football Association, Terje Svendsen, and Minister of Culture and Gender Equality, Anette Trettebergstuen.

King Harald is a big supporter of football and sports in general. In September,King Harald visited the Vålerenga football club in Oslo. In the men’s locker room at the stadium, King Harald met with representatives from Fotball Norway. One of the girls playing on Vålerenga’s team for 14-year-old also spoke with the King about youth football during the pandemic and the unity of being a part of a team. The King learned how Vålerenga and other football clubs work to create inclusion and community for all children and young people. Sigrid Heien Hansen from the A-team for women and Christian Dahle Borchgrevink from the A-team for men spoke to the King about their life as football professionals.

During that visit, His Majesty the King said: “Children and youth sports make an important effort to include everyone. There is room for everyone. That is great. For children and young people, sport should be an arena for play and fun. Here you do not have to be so very good. The most important thing is to have fun with classmates and club mates.”