Today marks 50 years since then Crown Prince Harald married Sonja Haraldsen, and she became Crown Princess of Norway. The day will be celebrated today with a service in the same church as the wedding took place 50 years ago. However, you could not have a proper royal wedding without a sensational cake. The Crown Prince Couple’s wedding cake was a gift from Oslo’s Baker Society, and it was made by only two bakers.

It took baker-master, Rolf Bjerke and his colleague, Gunnar Frivold 120 hours to bake the wedding cake: a plum cake of 150 kg, 2.5 meters high, on seven floors. The man who decorates the whole cake was Rolf Bjerke – and the cake was made in the bakery of Baker Samson on the Gyldenløve Street in downtown Oslo. The cake contained, among other things, 1 litre of cognac, 1.5 litres of room, 10 kilograms of butter, 10 kilograms of sugar, 14 kilograms of flour, 26 kilograms of different fruits, 50 kilograms of marzipan and 200 eggs. Two proud bakers – Rolf Bjerke and Gunnar Frivold poses with the cake before it was moved to the Royal Palace. Photo: Leif Ørnelund / The Norwegian Digital Museum/ Oslo Museum.

Each of the seven layers was decorated with the then new monogram of Sonja Haraldsen and Crown Prince Harald. Other decorations were red hearts made out of sugar, a golden horse, a small sailing boat and an angel symbolising Amor. On top of the cake were two miniature figures of the Crown Prince Couple, surrounded by a royal crown painted in eatable gold.

The cake had many similarities with the cake that Crown Prince Haakon and Crown Princess Mette-Marit had at their wedding in 2001. Also, that cake had seven layers, weighed about 150 kilos, but it was a bit higher. It measured 2.7 metres. 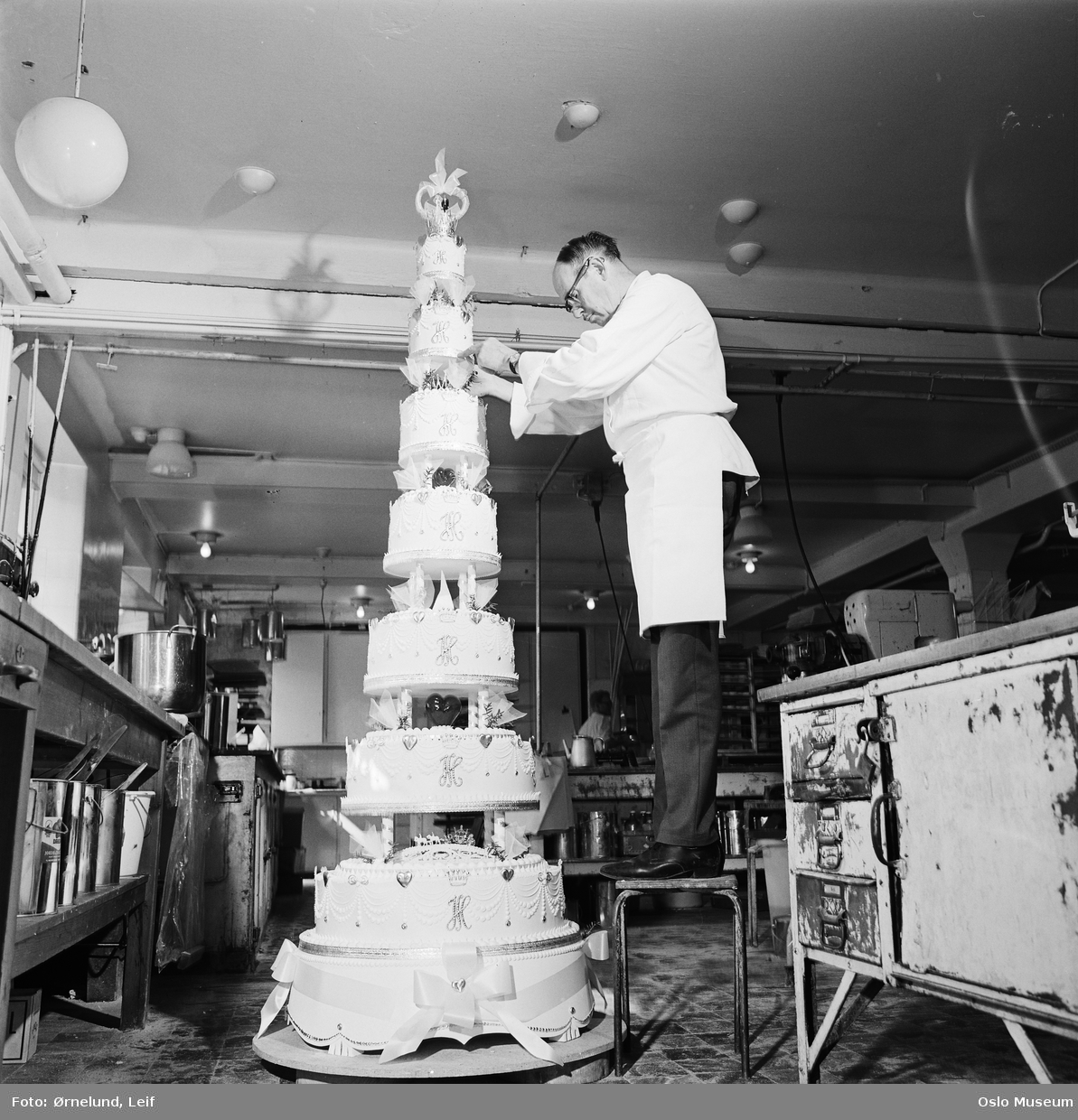 The last details are added to the cake before transport to the Royal Palace in Oslo. Photo: Leif Ørnelund / The Norwegian Digital Museum/ Oslo Museum.

The engagement between Crown Prince Harald and Sonja Haraldsen was announced on 19 March 1968. Then the Deputy President Bernt Ingvaldsen transferred King Olav’s official announcement to the Storting. As soon as the engagement became known, it was flagged in all public buildings.

During the lunchtime, Oslo was decorated for a party with flags and flowers. Nearly 3,000 soldiers guarded along the wedding route from the Royal Palace to the cathedral. About 850 guests were invited to the wedding.