King Harald and Queen Sonja of Norway are currently on their state visit to Chile. They arrived in Santiago on Tuesday, and Wednesday, they were received by the President of Chile and used the day for political conversations. The state visit’s third day began with a business seminar. The day started nicely for the royals, and it was His Majesty King Harald who opened the workshop with the Queen present.

In his opening speech, His Majesty the King said:

“My father, the late King Olav V., visited Chile 52 years ago. Since then, both Chile and Norway have developed considerably – and so have our bilateral relations. I believe a good way to start is to strengthen cooperation across nations, across industries and between research and business. The aim of this state visit and today’s seminar is exactly to contribute to this.”

After attending the seminar, the royals were met by a large crowd of protesters. With flutes and megaphones, the protesters made a lot of sound towards the royals and the Norwegian business delegation. “The Norwegian fish farming companies that are present in Chile have double standards. They have very high standards when it comes to the environment, sanitary conditions and social and working conditions in Norway. But worse conditions here in Chile,” said Juan Carlos Cardenas to Norwegian NTB.

It was the organisation “Centro Ecoceanos Chile”, which is part of a coalition that works to make the fish farming industry in the country responsible, where several Norwegian companies are present, who protested against the state visit. The organisation has announced that they will hold several demonstrations during the ongoing state visit that ends on Sunday.

Despite the big demonstrations, the King and Queen carried on to a ceremony hosted by the Norwegian Kon-Tiki Museum. It was the Kon-Tiki Museum’s initiative to return many archaeological objects and photographs to the Easter Island. Easter Island is a Chilean island in the southeastern Pacific Ocean, at the southeasternmost point of the Polynesian Triangle. The island is most famous for its nearly 1,000 extant monumental statues, called moai, created by the early Rapa Nui people. 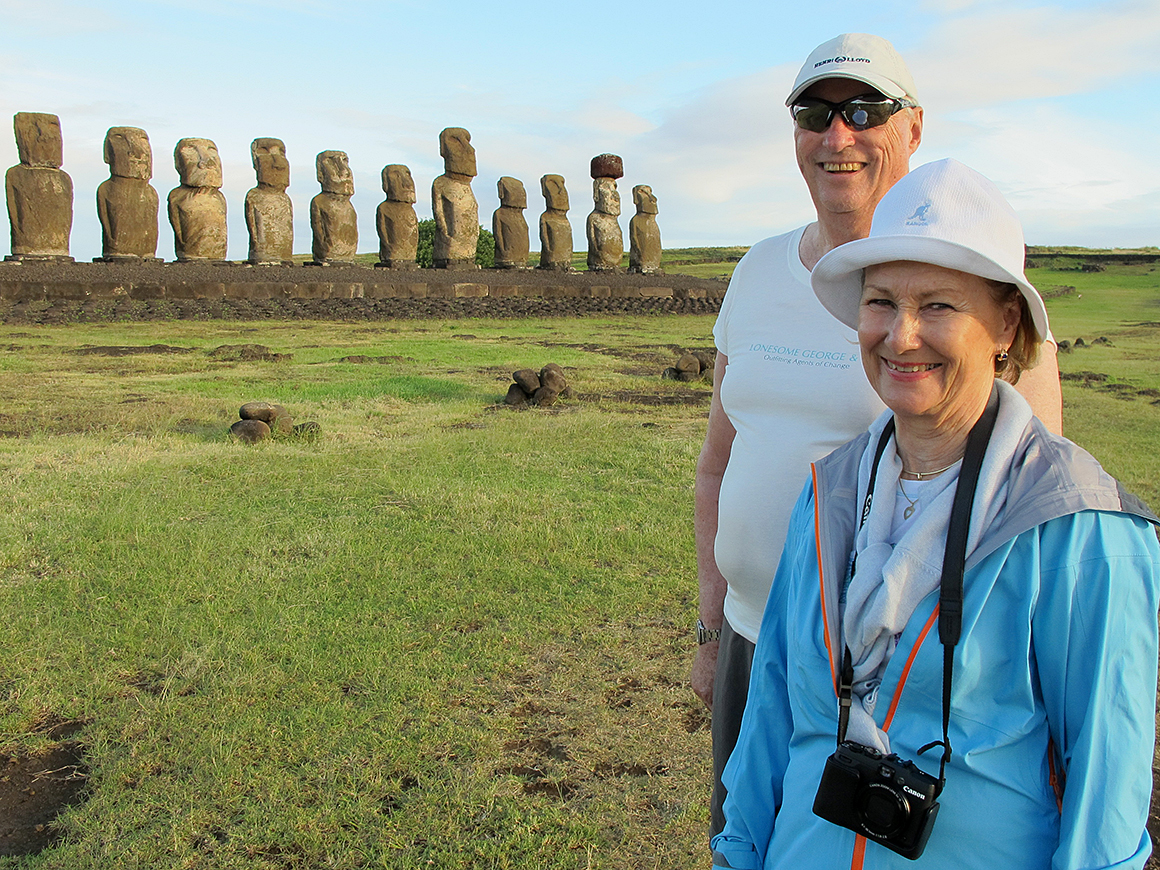 During the Easter of 2014, King Harald and Queen Sonja visited the island privately on their holiday. “It was an incredible experience to travel to Easter Island. It was a magnificent island. When Thor Heyerdahl was there, it was brown, and there was almost no green grass or a tree. Now it’s a completely different island. It was a green and beautiful place with many trees”, said King Harald about his visit to Easter Island.

Following the ceremony, the royals travelled to meet the Mayor of Santiago, Mr Felipe Alessandri. King Harald and Queen Sonja then met with meet representatives of the Norwegian community and the Norwegian colony in Santiago. There are currently a Norwegian colony in Chile with about 300 inhabitants, most of whom reside in the Santiago and the Puerto Montt areas. Many are former Chilean refugees who have returned to Chile, as well as many Chileans of Norwegian descent, who can trace their origins back to Norwegian whalers, sailors, engineers and shipping industry employees who emigrated to Chile more than a century ago.

The third day of the state visit concluded with a dinner hosted by the King and Queen for the Chilean guests.