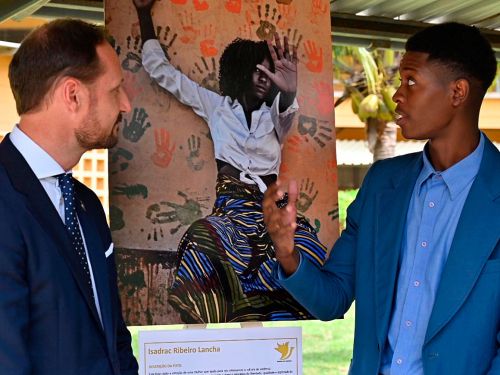 On Thursday His Royal Highness Crown Prince Haakon had a tight schedule for the second day of his  Mozambique-visit. Business opportunities first appeared on the agenda. After a breakfast attended by ministers and business leaders from both countries, Crown Prince Haakon spoke at the opening of a major business seminar.

In a speech given by the Crown Prince at the opening of a business seminar, His Royal Highness said: “I am very happy to be back in Mozambique, this time accompanied by a Norwegian business delegation. Norway stands ready to share its accumulated experience and knowledge, and help Mozambique’s promising offshore industry to leapfrog its way to a more competitive position.”

There have been several periods of unrest and civil war in Mozambique. On August 6 2019, the two parties to the conflict entered a peace agreement. Women and children are severely affected by conflict and unrest, and women must play a significant role in establishing a safe and lasting peace. Mozambique and Norway work together to increase women’s participation in conflict resolution. The Crown Prince therefore also attended a seminar on issues related to women in Mozambique.

During the seminar on Women, Peace and Security Crown Prince Haakon said: “Norway remains committed to supporting the crucial work to secure lasting peace in your wonderful and diverse country. Peacebuilding is hard work. It requires patience. The ability to listen. It requires reconciliation. It requires Ubuntu. This astonishing ability to seek solutions together and to move on – which so many of us can learn from.”

A separate photo exhibition takes place in connection with the seminar, marking the 20th anniversary of UN Resolution 1325 on women, peace and security. Crown Prince Haakon was given the opportunity to talk to women who shared their stories and hear how they view opportunities and challenges in the peace work ahead.

Crown Prince Haakon than travelled on to meet the Sitoe family, who got electricity to their home during the visit. Access to energy is a fundamental prerequisite for economic and social development, and thus a major factor in the fight against poverty. The Crown Prince had the honour of turning on the light, which will change the everyday life of the family. Under 30% of Mozambique’s population has access to electricity.

Crown Prince Haakon’s visit to Mozambique ended with a reception in Maputo hosted by the Norwegian embassy. The event took place at the Fisheries Museum, which was built in a collaboration between Mozambique, Norway and Iceland in 2008. In the entrance, guests could see an exhibition about the long-standing cooperation between Norway and Mozambique. Seafood from both countries’ culinary tradition was on the menu.

During the Reception at the Fisheries Museum, His Royal Highness held a speech where he said: “Mozambique and Norway have a long history of close cooperation, dating back to your country’s struggle for independence. I hope you had the chance to study the exhibition in the foyer on your way in. It gives a fascinating overview of the long and cordial history of our relations. My grandfather King Olav met your former president Samora Machel when President Machel paid an official visit to Norway as the first president of an independent Mozambique in 1977.”