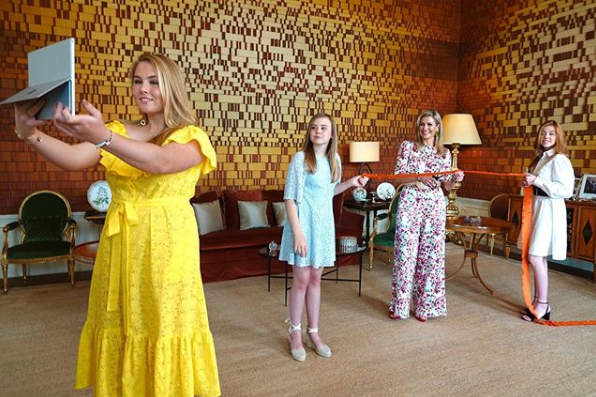 Queen Máxima of the Netherlands and her three daughters Princesses Amalia, Alexia and Ariane, opened a digital free market during King’s Day at Home this morning.

While a free market, also known as a flea market, is one of the traditions of King’s Day, it was one of the things that was cancelled among the rest of the celebrations today. However, the digital free market does not only have royal approval, but it also supports KiKa, a foundation for research into childhood cancers.

Earlier this morning, King Willem-Alexander kicked off the celebrations for his birthday with a heartfelt speech. He said, “How special it is that we have managed, despite social distancing, to form a unity and to be an example for many so they may sing-along all throughout the country. King’s Day at home promises to be one of a kind, mostly because I hope it will be the very last time we have to celebrate it at home.

“Try to make the most of it so that you will always remember how you spent this day at home, but still together. This has been made possible by Koningsdagthuis.nl, which will upload the activities you do and show them. I want to thank all those who worked so hard to put this website up in such a short time. Without you, this King’s Day at home would have had a lot less of the “we-feeling.”