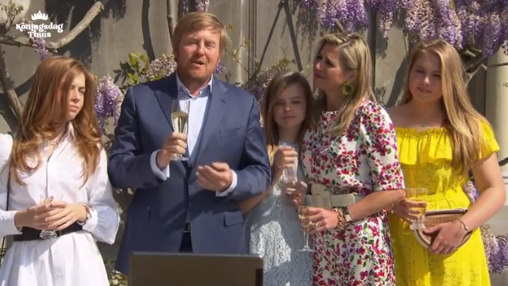 The King’s Day at Home festivities ended at 4 P.M. with a national toast to King Willem-Alexander.

His mother, Princess Beatrix, said, “Dear Alexander, who would have ever thought that I would be congratulating you this way on your birthday?” Prince Constantijn added, “On behalf of the family, we want to congratulate you, and we toast to your health and the health of all those in the Netherlands. Be well!” The others joined in with a “cheers!”

King Willem-Alexander once again took the opportunity to thank everyone who was keeping the economy going right now – from the healthcare professionals to the farmers to the supermarket staff. He said, “There are so many people keeping the Netherlands going right now. So for them, a very special toast!”

He finished his toast with the words, “A very happy King’s Day for everyone in the Netherlands and enjoy the sun and the day!”

The family then sang Happy Birthday to King Willem-Alexander, ending with an enthusiast “Hurrah, hurrah, hurrah!”