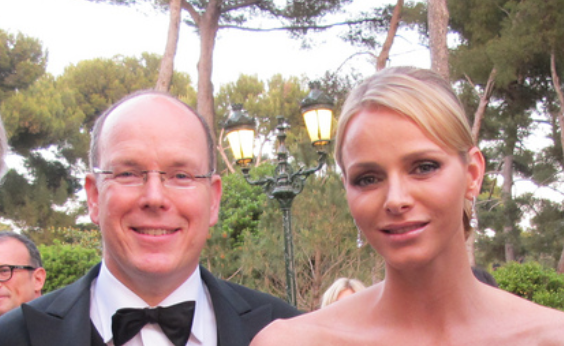 Princess Charlene’s birthday began with her resharing a video made to mark the day which highlighted her romance with Prince Albert.

In the three minute montage, created by the Princess Charlene Foundation in South African and shared twice by the royal herself on her official Instagram, Charlene and Albert are seen cuddling, kissing and smiling happily at one another in a wide range of images. They are also seen enjoying the company of their twins, seven year old Prince Jacques and Princess Gabriella.

The video highlights some of the princess’ main focuses including water safety and conservation. And it spotlights her role as Princess of Monaco, showing her with a series of world leaders including Barack Obama.

The Princess Charlene Foundation SA promotes the benefits of sport as well as teaching water skills and working towards the eradication of drowning. Sharing the video, it said to the princess that ”We honour you for how much you always give of yourself to change people’s lives around the world, your passion and dedication to saving and changing lives is truly an inspiration. We trust this video of your journey thus far reminds you just how loved and appreciated you are.”

The montage was shared early on January 25th 2022, the day the Charlene turns 44. Last year, the Foundation celebrated her birthday with a simple image of her with her two children – much has changed since her last birthday. In spring of 2021, Charlene travelled to South Africa for work on a conversation project but soon afterwards, suffered an ear, nose and throat infection, a complication of previous surgery. It meant she was unable to fly for months as her ears would not pressurise above certain altitudes. She underwent further operations in South Africa and at one point was rushed to hospital. She finally returned to Monaco in early November 2021 when she was seen with her husband and children. Soon afterwards, the Prince’s Palace issued a statement saying she was being treated outside of Monaco for an unspecified condition.

Charlene Wittstock was born on January 25th 1978 and became a successful international swimmer, competing in the Olympics. She met Prince Albert at a swimming event in Monaco in 2000 when he was still heir to his country’s throne. The couple announced their engagement in 2010 and married in July 2011, firstly at a civil ceremony and then, on July 2nd, at a religious service at the Prince’s Palace. It was reported before their wedding that Charlene had tried to flee Monaco – both she and Albert have always denied that. They welcomed twins in December 2014.