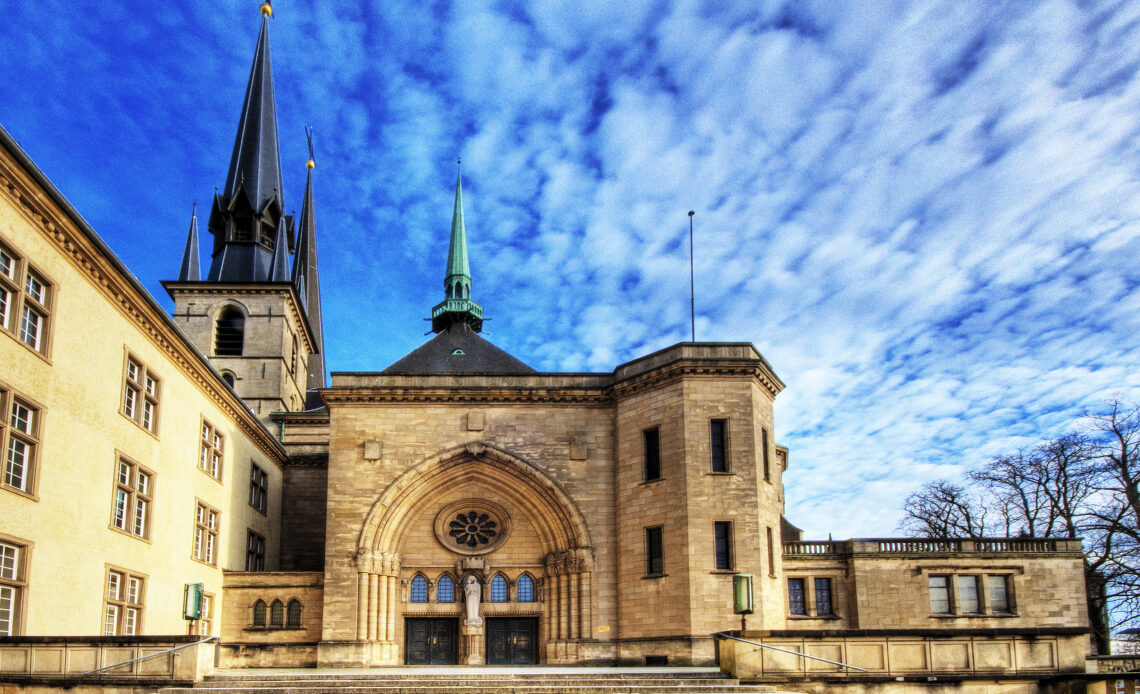 Forty years ago, on a day for lovers, a future sovereign married his consort in a cathedral filled with royal resonance. As Grand Duke Henri and Grand Duchess Maria Teresa celebrate their ruby wedding anniversary, Royal Central takes a look at the famous setting for their historic marriage.

Henri, then Hereditary Grand Duke of Luxembourg, and Maria Teresa Mestre y Batista had told the press at their engagement interview that they weren’t sure where they would wed. But they soon confirmed that their marriage, set for February 14th 1981, would be celebrated in the same locations of those of Henri’s parents. Grand Duke Jean and Grand Duchess Josephine-Charlotte.

In fact the Cathedral has long links with Luxembourg’s ruling family. Not only had Jean wed there, so had his mother, Grand Duchess Charlotte. The Cathedral had become a central part of the royal dynasty’s modern story as well as a focal point for Luxembourg as it recovered from World War Two. Usually, the Grand Ducal Family attend a Te Deum at the Cathedral on Luxembourg’s national day while it is also central to the main religious festival in Luxembourg. The Octave takes place from the Third Sunday after Easter when the statue of the Consoler of the Afflicted is paraded through the city and masses and services take place, often attended by the Grand Ducal Family. In recent years, the Cathedral has been the place they said their final goodbyes with the burials of Grand Duke Jean and Grand Duchess Josephine-Charlotte taking place there. But its origins were far more humble.

It had begun life as a parish church. The first stone was laid in 1613 by a Jesuit community which had arrived ten years earlier and established a school. At the time, Luxembourg was part of the Holy Roman Empire. The church was consecrated in 1621 when it was dedicated to the Immaculate Conception. In 1773, the Jesuits left Luxembourg. Five years later, Empress Maria Teresa gave the church to the people of Luxembourg and it was renamed as the Church of St. Nicholas and St. Therese. It remained an integral part of local life as Luxembourg as made a Grand Duchy in 1815.

In 1840, an Apostolic Vicar was appointed in Luxembourg for the first time and when that role passed to Jean-Theodore Laurent, in 1841, his considerable energy had a major impact on the faith community and the church itself. He changed its name to the Church of Notre Dame and when Luxembourg was made a bishopric, by Pope Pius IX in 1870, it became a Cathedral. It remains the only Cathedral in Luxembourg.

The building bears the hallmarks of the changes it has undergone throughout its history. Its architecture is gothic although it has Renaissance influenced elements. Its interior was remodelled in 1854 by Nicolas Adames, who succeeded Jean-Theodore Laurent as Apostolic Vicar, in a neo-Gothic style. But just before World War Two, even more changes were made.

Between 1935 and 1938, the Cathedral was enlarged under the direction of architect Hubert Schumacher. Part of his aim was to integrate the larger building with its surroundings, to add to the grandeur of Luxembourg City. During this process, two more towers were added to the Cathedral including the famous central tower which is notably shorter than the original west tower and the new east tower. The changes were worked around the famous stained glass windows and alabaster adornments. After World War Two, the sculptor Lucien Wercollier created a memorial called The Political Prisoner and a version now stands in the grounds of the Cathedral as part of the Monument of the National Resistance and Deportation.

While visitors tend to look up when they enter the Cathedral, to enjoy the huge vaulted ceiling, beneath them is more royal history. For the crypt contains the tombs of several members of the Grand Ducal Family including the first woman to rule the country in her own right, the ill fated Grand Duchess Marie-Adelaide. By the time of Henry and Maria Teresa’s wedding, it had also become the resting place of the groom’s paternal grandfather, Prince Felix of Bourbon-Parma.

On February 14th 1981, the newlywed couple emerged into the chilly air beneath the famous towers to a large crowd who had turned out to see them. Nine months later there were further celebrations when Henri and Maria Teresa welcomed the first of their five children, a son named Guillaume. Three decades later, he would marry in the same Cathedral.

Maria Teresa, who became Grand Duchess of Luxembourg on her husband’s accession to the throne in 2000, had part of her wedding train used to make a new outfit for the statue of the Christ child in the Cathedral before Guillaume’s marriage to Stephanie de Lannoy. That gesture along with the wedding itself added another chapter of royal history to this famous building.