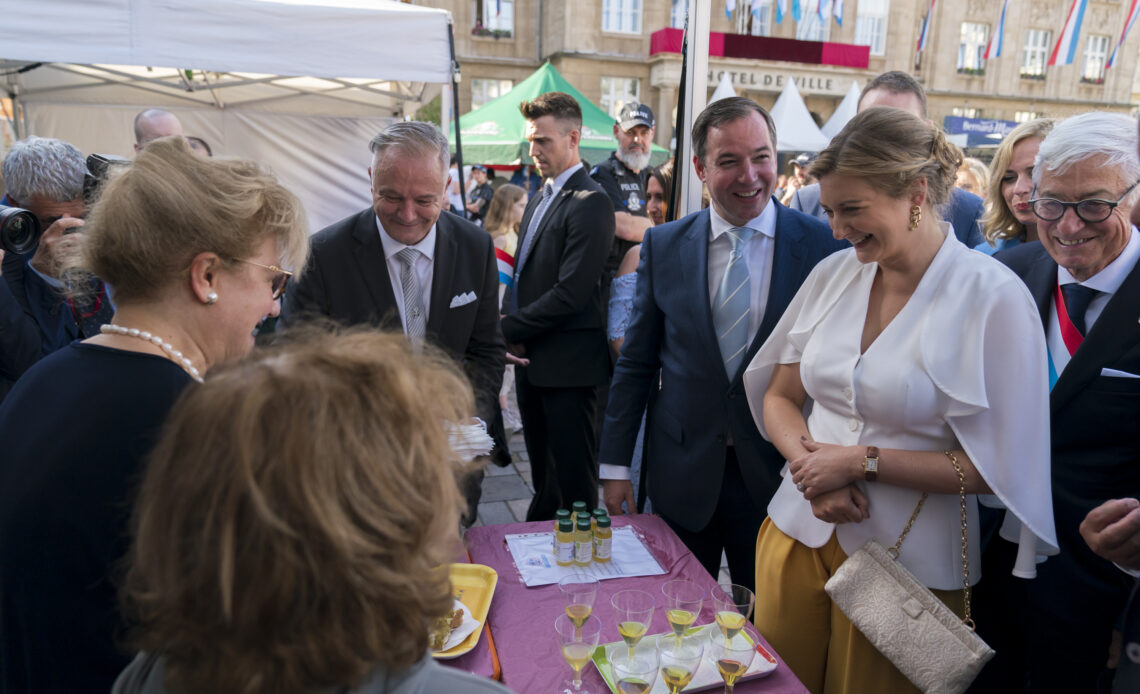 The Luxembourg Grand Ducal Family was busy on Wednesday, 22 June, as they gave the initial push to the celebrations for National Day, which falls on the 23rd.

Grand Duke Henri and Grand Duchess Maria Teresa were in Lellingen, a small village in the north of the country famous for hosting the National Day Arts Festival.

Upon their arrival, the Grand Ducal Couple was welcomed by the Mayor of Lellingen, Yves Kaiser; the President of the House of Representatives, Fernand Etgen; the Minister of Civil Service and Relations with the Parliament, Marc Hansen; and the Minister of Spatial Planning and Energy, Claude Turmes.

Also present were members of the council of aldermen of the municipality, and three representatives elected for the northern district of the country.

Authorities exchanged a brief salute on the notes of “Wilhelmus,” played by the Kiischpelt Fanfare before the Mayor of Lellingen gave a welcome speech.

It was then time for the Grand Duke and Grand Duchess to begin their activities. They received a tour of Schoulkauz Primary School, curated by its students before Grand Duke Henri conceded a gold Grand Cross and bronze or vermeil (gold-plated silver) medals to members of the Fanfare and the First Response Centre for their services to the population.

Open Air Konstfestival celebrates in 2022 its 30th anniversary, and the Grand Ducal Couple visited three art galleries, before watching some live installations and a pantomime performance on the streets.

Before leaving, Grand Duke Henri and Grand Duchess Maria Teresa greeted the crowds that had gathered to cheer on the royals, including builders, students, artists and ordinary citizens.

On the town’s main square, Place de la Résistence, the couple was welcomed by the Mayor, George Mischo; the Vice-President of the House of Representatives, Mars Di Bartolomeo; the Minister of Home Affairs and Equality between Women and Men, Taina Brofferding; the Minister of Sport and Labour, Employment and the Social and Solidarity Economy, Georges Engel; the Minister of Environment, Climate and Sustainable Development, Joëlle Welfring; as well as members of the council of aldermen and of the municipal council.

The first event of the day was the deposition of a flower crown at the Monument for the Dead, where the Hereditary Grand Ducal Couple observed some moments of silence in memory of all those who lost their lives.

The royals then moved to the Hotel de Ville (the headquarters of the municipality), from where they watched the parade of roughly 40 associations, before joining authorities for a short reception.

Prince Guillaume and Princess Stéphanie then joined the crowds and took a tour of the “Escher Volleksfest”, or Popular Fest of Esch-sur-Alzette.

The final event was the lighting of a campfire with the Luxembourgish scouts before the couple headed back to Luxembourg City, where, together with the rest of the family, they are expected to attend the traditional Thanksgiving Service and Gala reception for National Day.