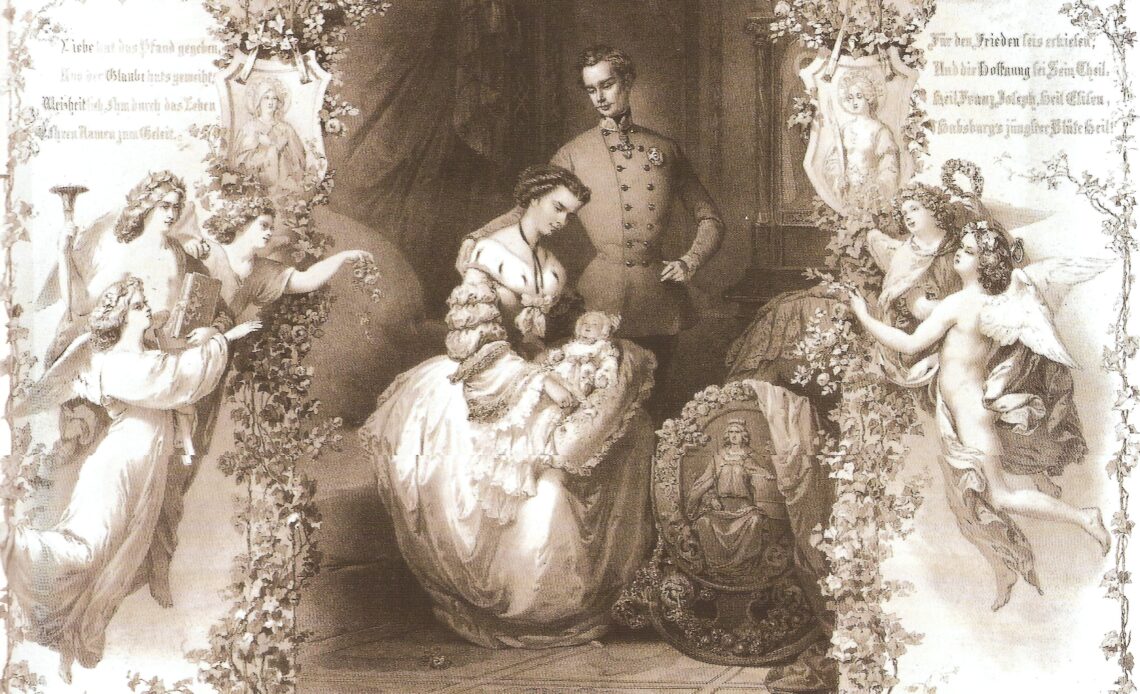 It had not been an easy pregnancy and Elisabeth suffered from morning-sickness. According to a Hungarian lady-in-waiting writing later, the Emperor’s mother, Archduchess Sophie had apparently forced the young Empress to go out into the palace garden, to publicly display her pregnancy. We must suppose that the reference to the Archduchess Sophie actually dragging her young daughter-in-law out into the garden is surely exaggerated and probably only emphasises Sophie’s insistence on the point. But if Elisabeth was remembering correctly, then Sophie – ever the dynast – knew that all royal pregnancy was of course, political and could be proved by perambulating the mother-to-be in public: a comment that the future was secure in her growing shape.

Elisabeth was at the Hofburg in Vienna when her labour pains began at seven o’clock in the morning. The Emperor woke his mother, the Archduchess Sophie, who seated herself outside the imperial bedchamber and embroidered whilst she waited. Empress Elisabeth’s Appartement only occupied the Amalienburg Wing of the Burg from 1857 onwards and in fact, Elisabeth’s dual-purpose drawing-room and bedroom which can be seen today, had served the imperial couple as their shared bedchamber until it was converted for the Empress’s sole use.

The Empress gave birth on 5 March 1855 – it was a baby girl. The announcement of the birth in the newspapers much resembled the words in the diary of the Court Chamberlain, Count Khevenhüller back in 1755, namely that the Empress Maria Theresia had been delivered of a ‘small, but completely healthy Archduchess’‘ – the future Queen Marie Antoinette of France. A Te Deum was celebrated in St Stephan’s Cathedral. The Viennese press continued to publish regular bulletins issued by the court physician, Seeburger, on the health of the mother and child. The ceremonial baptism was scheduled for the next day. Historically, a room was usually set up for the christening in the residence in which the imperial birth had taken place.

A commemorative print was published on Sophie’s birth, entitled Habsburg’s jüngste Blüte [Habsburg’s Youngest Blossom]. A tinted lithograph by Eduard Kaiser after a sketch by Karl Josef Geiger, it survives in the collections of the Austrian National Library. A charming image, it shows the Emperor Franz Joseph with the baby Archduchess seated on the Empress Elisabeth’s lap and flanked by angels, together with the patron saints of the child.

The christening was performed on 6 March 1855 at two o’clock in the afternoon in the imperial and royal parish church of the Hofburg [k. k. Hofburgpfarrkirche]’, the Burgkapelle. The first chapel in the Burg had been mentioned in 1296 in a Habsburg charter as a ‘capella nosta castri nostri Wiennensis’ [Our Chapel in Our Castle of Vienna’]; the parish chapel was only dissolved on 31 December 1919. The present plaque outside the Burgkapelle refers to it simply as the ‘CASTLE CHAPEL Maria Himmelfahrt 1447-1449. Newly built, baroque alterations of the interior in the 17th and 18th centuries’. Reports of the christening tells us that the child was carried by the Baroness von Welden – later Crown Prince Rudolf’s beloved governess ‘Wowo’ and ‘erzherzogliche Aja’ – on a pillow richly embroidered with pearls and covered with silver cloth, together with the female servants employed to serve in her Household. Naturally, the Archduchess Sophie was chief godmother, standing to the left and holding the child with her right hand, who was baptised with the names Sophie Friederike Dorothea Marie Josepha.

After the baptismal rites were ended, the baby was brought back to the Hofburg apartments of the Empress, who had not attended the ceremony. Once again, this was entirely in keeping with court protocol. As the Empress had given birth, she did not attend. We might recall that the future Marie Antoinette’s christening in the Vienna Augustinerkirche was attended by her father, Holy Roman Emperor Franz Stefan I, who like Emperor Franz Joseph, attended instead of his wife, the Empress Maria Theresia.

Several historic and exquisite imperial christening sets may be found in the great collections of the Kunsthistorisches Museum in Vienna, although it is extremely unlikely that these would have been used for the little Archduchess Sophie’s baptism in 1855. These include the gold-embroidered set of silver lamé (1790) gifted by the Empress Maria Ludovica and a baptismal set given by Empress Maria Theresia – made from three older sets in the Treasury and used solely for the christening of Joseph II’s daughter.

At some point in about 1856, Sophie was painted, perhaps by the artist Franz Schrotzberg, who had painted Elisabeth in around 1854/55 and for whom Elisabeth appears to have actually posed. A version of this may be that image in a heart-shaped frame today displayed among the family pictures in Elisabeth’s private suite of rooms in the Hofburg. Little Sophie was adored by her grandmother, the Archduchess Sophie, who doted on her namesake and described her frequently in her diary.

Elisabeth proposed that the two-year-old Sophie accompany her and the Emperor for their winter journey to Northern Italy in 1856/7. Not long after their return, the Emperor and Empress set out for Hungary, travelling down the Danube. Perhaps encouraged by the fact that Sophie had borne the winter stay in Italy without illness, Elisabeth decided that Sophie should also accompany them to Hungary, as well as the baby Archduchess Gisela. Clearly, Elisabeth wanted the children with her.

Little Sophie had fallen ill with a minor attack of diarrhoea and fever before they set out for Hungary, but it seems that the physicians simply ascribed this to the fact that the two-year-old was teething. Arriving in Hungary, the imperial family took up residence in the Royal Palace at Buda (not joined with Pest until 1873). Franz Josef and Elisabeth’s private rooms in the Royal Palace were not part of the old apartments but instead situated on the first floor of the south-west Krisztinaváros Wing, so named after Maria Theresia’s favourite eldest daughter, the Archduchess Marie Christine (‘Mimi’). It seems likely that the imperial nurseries were also housed within this wing, as the archducal suites were not completed until the turn of the next century.

About a week after their arrival in Hungary, the ten-month-old Archduchess Gisela fell ill with a fever and diarrhoea but recovered. Little Sophie became ill. And, just as the newspapers had printed regular updates on the child and the Empress following the birth, so now frequent bulletins came through about Sophie’s worrying state of health. The previous day, the Emperor and Empress had resumed their tour programme by continuing on to visit the Hungarian provinces, reassured by the reports of the doctors. Five days later, the visit was broken in the southern Hungarian city of Debrecen, as a telegram arrived with the news that the toddler’s condition had drastically worsened. Elisabeth remained at the side of her child for some eleven hours. On 29 May 1857, little Archduchess Sophie died.

The Emperor and Empress left by special train for Vienna, leaving behind the body of the child, which was laid in state in the imperial and royal palace church at Buda, to be afterwards taken to Pest Railway Station and then returned to Vienna by train.

Today, the tomb, [No. 78B] is to be found in the Ferdinand Vault of the Capuchin Crypt in Vienna, the historic burial chamber of the Habsburgs on Vienna’s Tegetthoffstrasse. The inscription: ‘Sophie Friederike 1855-1857’ is written on a simple memorial tablet. Yet she is not alone. The little Archduchess shares her resting place in a wall niche with other Habsburg archdukes and archduchesses, including the child Archduchess Maria Anna (1835- 1840), Emperor Franz Josef’s sister, who died at the age of five. According to Elisabeth’s biographer Joan Haslip, the nineteen-year-old Empress visited the Capuchin Crypt each day in the summer of 1857, to see the tomb of her child. But the tomb did not always rest where it does today. According to information supplied by the Capuchin Crypt, Sophie’s sarcophagus originally stood in the Franz-Josephs-Gruft, designed for the Emperor’s 60th Jubilee by the Croatian architect Cajo Perisic and which contains the three sarcophagi of the Emperor Franz Joseph, the Empress Elisabeth and the Crown Prince Rudolf.

Some subtle traces of Sophie remained. A small likeness of her is thought to be worn at Elisabeth’s wrist on a bracelet, in one of her official portraits made of her at the age of twenty-six. It is certainly little Sophie who is included in her toddler’s chair as a portrait on the wall, clutching a kitten, in a beautiful watercolour by Josef Kriehuber.

But there was another important find, which showed that Sophie was far from forgotten. On 24 September 2014, a particularly poignant memento of Sophie was sold on the Bavarian art market, in the auction entitled ‘Alte Kunst’, 365 [Old Art], Kat.-Nr. 1072. The Schloss Schönbrunn Kultur- und Betriebsges.m.b.H purchased nine objects from the Munich auction house Neumeister, which had been either commissioned by the Emperor Franz Josef or were once part of his estate. Among these objects was a posthumous watercolour on paper by the Hungarian artist Miklós Barabás, depicting the two-year-old Sophie surrounded by pink roses and lilies. This moving image showed the child lying on her pillow in the palace at Buda, with a jewel-encrusted crucifix in her hands.

The watercolour takes the form of a passepartout and is backed on black velvet. Covered in black leather with a folding stand, this meant that it could be transported around. The present author was able to examine the watercolour in the small exhibition displayed in the Audience Waiting Room at the Hofburg entitled ‘Aus kaiserlichem Nachlass’ [From the Emperor’s estate’], which ran from 25th April until 15th November 2015.

And there was more to come. Researching the watercolour further, the present author found that the watercolour bore an original stamp to say that it had formerly belonged to the Empress Elisabeth, for the inventory sticker (103) on its reverse read: ‘Eigenthum I. M. der Kaiserin” [Property of Her Majesty the Empress].

According to an article in the Wiener Zeitung in 2015, the Empress Elisabeth kept the watercolour of her first daughter with her, taking it along on her travels and displaying it in her rooms. The picture was later discovered at the Hermes Villa in the Lainzer Tiergarten, Vienna, among the Empress Elisabeth’s personal effects.

Elizabeth Jane Timms is a royal historian and writer, specializing in Queen Victoria's family, Russian royalty and the Habsburgs. An independent scholar of royal studies, she has studied historic British and European royalty for nearly twenty years, speaking on the subject for both TV and BBC radio.
We use cookies to ensure that we give you the best experience on our website.OkayNo