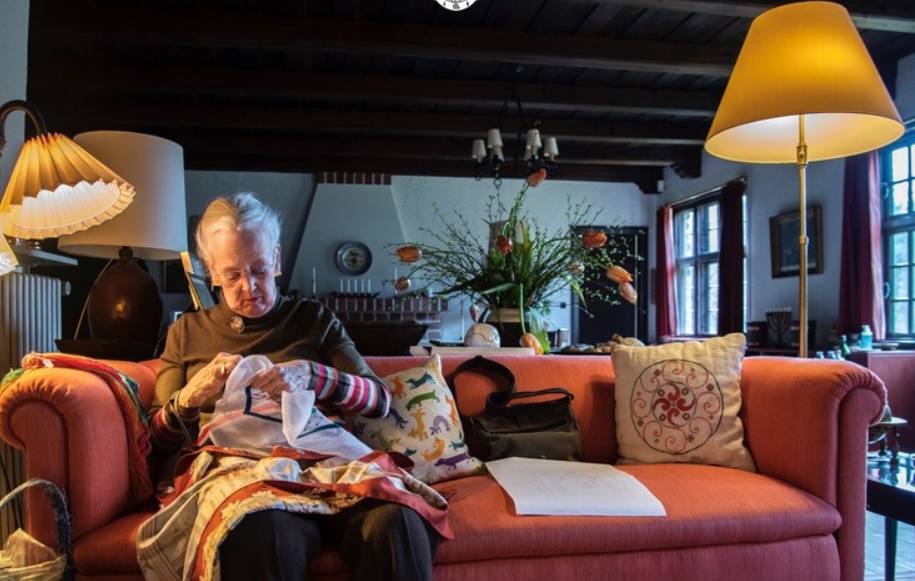 Queen Margrethe of Denmark has always been interested in needlework. During the pandemic, the Queen has had extra time for her hobby and this has resulted in a large scale production of embroideries. Now more than 100 of the Queen’s embroideries will be shown in a new exhibition so that the Danish people can also see the Queen’s colourful creations. The Queen herself will open the exhibition this week, a rare official event for the Danish monarch during the pandemic.

The exhibition will open at the gallery “Kings Gathering” on April 23rd in the Danish city of Koldinghus. The Danish monarch will be accompanied by his sister Her Royal Highness Princess Benedikte of Denmark and Sayn-Wittgenstein-Berleburg. The exhibition can be seen until 2 January 2022. In connection with the opening, Her Majesty the Queen has said: “It is fantastic to be focused on something you create with your own hands”.

The embroidery is either used by Queen Margrethe or given away as a gift. The colours and motifs are adapted to the person who will receive the gift or the room where the embroidery will sit. The embroidery pattern itself is designed by the queen and the colour choice is characterized by the queen’s preference.

During her stay at Trend in March 2021, the Queen worked on several embroideries that can be seen in the exhibition at Koldinghus. The Queen has, among other things, filled the corona period by embroidering a number of pillows and stools. These pillows from Fredensborg Castle were created during the first corona lockdown. On several of the embroideries on display, you can see clear monograms from Crown Princess Mary, Princess Marie and Princess Josephine. There are also a large group of hexagonal pillows, which are decorated on a daily basis in the Queen’s study at Marselisborg Castle, you can recognize the motifs from the Queen’s painting series “From the outer coast”.

However, it is not just this exhibition of her own embroideries that the Queen and Princess Benedikte will open on Friday. The same gallery also opens a new exhibition with a different royal theme. A larger exhibition about Queen Margrethe’s ancestor, the Danish King Christian V, also opens this day.