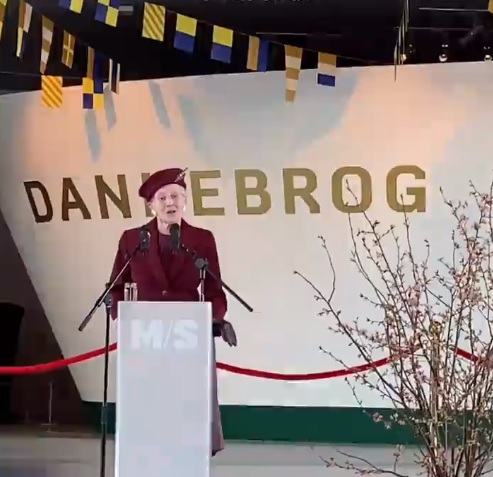 Since 1932, the Royal Yacht Dannebrog has functioned as a floating castle for the Danish Royal Family. The ship is thus celebrating its 90th anniversary as an official and private residence for the royal family on summer cruises in Denmark, or on overseas official visits. To mark this occasion, Queen Margrethe of Denmark, has opened an exhibition of the yacht`s history.

At the official inauguration, there were speeches by director Ulla Tofte and chairman of the board Erik Østergaard, after which the Queen declared the exhibition open. After the speeches, the Queen was given a tour of the exhibition by the director and museum inspector. The exhibition is a journey with the Royal Ship through nine decades, and a meeting with the three monarchs that has used the yacht, King Christian X, King Frederik IX and the current monarch, Queen Margrethe II.

The exhibition tells about the ship’s significance for the royals, about life on board for the crew and the royal family and about the Danes’ personal encounters with theyacht. The first command on board the ship was given on May 26, 1932 and the ship was named the year before by Queen Alexandrine of Denmark. The ship was built between 1931 and 1932 at the Naval Shipyard in Copenhagen, and replaced the previous royal ship, the steamer “Dannebrog” which had been built in 1879.

When at sea, the Royal Yacht also participates in surveillance and sea-rescue services. The Royal Yacht is still in excellent condition, with major improvements having been carried out over the years, including replacement of the main engines.

The Queen is the patron of the M / S Museum of Maritime Affairs in Elsinore., and it was also Her Majesty who opened the museum in 2013. The museum tells the story of Denmark as one of the world’s leading maritime nations and the museum was designed by the design studio BIG, Bjarke Ingels Group. The museum is built into Helsingør Værft’s old dry dock.