Her Majesty Queen Margrethe II of Denmark has made a new antependium for Gråsten Palace Church. The new antependium was first shown to the public during a celebratory religious service in Gråsten Palace Church on 29 July 2018. Her Majesty the Queen, her younger sister, Princess Benedikte of Denmark and Sayn-Wittgenstein-Berleburg where present during the celebratory religious service on Sunday.

The Queen has created the antependium with the embroidery technique “petit point”, in which details appear diagonally with half cross-stitching. The embroidery on the new antependium consists of two broad columns on each corner of the altar table and a central motif. In the pattern, one can see, among other things, three ox-eye daisies, which symbolize the Queen and the sisters’ connection with Gråsten. 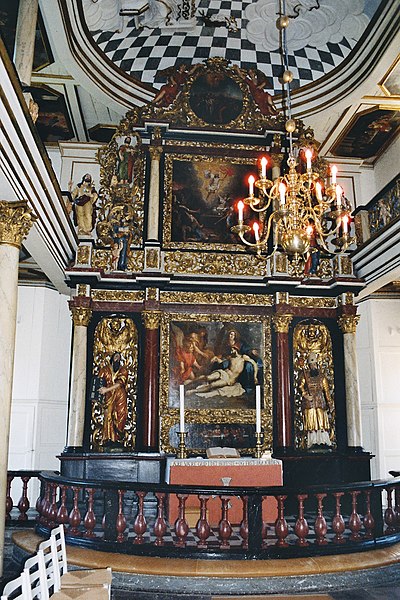 The chapel at Gråsten Castle. Photo: Dguendel via Wikimedia Commons.

From now on, The Queen’s antependium can be seen during services and other ecclesiastical functions in the more than 300-year-old palace church. As a working artist, the Queen has devoted herself to religious art a number of times over the years. This has particularly found expression in several religious textiles Her Majesty has sewn and embroidered in bright colours and with symbolic images related to the Christian theme.

Gråsten Castle is the summer residence of The Royal Family. The current Gråsten Castle, or rather the south wing, thus originates from 1759. In 1842 the main building was added. In 1935 the right of use of the castle was given to the late King Frederik and Queen Ingrid. HRH Prince Henrik past away on the 13 February 2018 in the age of 83.