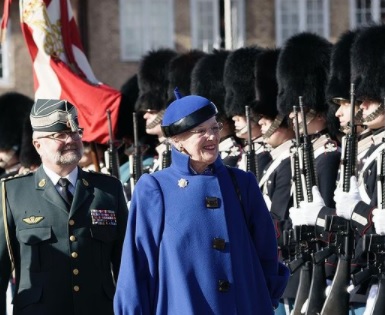 Queen Margrethe of Denmark was present at the inauguration of the sculpture ‘October 1943’ in the small Danish city of Humlebæk on Wednesday. The Queen arrived using the royal yacht. Upon arrival, Her Majesty was received by the Mayor of the Fredensborg Municipality, Thomas Lykke Pedersen. Following a series of speeches by dignitaries including Mayor Thomas Lykke Pedersen and artist Per Arnoldi, Her Majesty inaugurated the sculpture. The rain poured down as Queen Margrethe cut the cord in front of the monument. The inauguration was marked with a musical feature by Fredensborg Brass Ensemble.

The sculpture, created by artist Per Arnoldi, is a monument to commemorate the Danish Jews’ flight to Sweden during the German occupation. The sculpture consists of a nine square meter granite tile and a three-meter long boat.

The Queen also talked to Ole Philipssons who spoke to Her Majesty about his very personal story. He told Margrethe how as a 12-year-old, he, along with his parents, stood on the same beach they were standing on at that very moment to be helped to Sweden, away from the Nazi persecution of Jews and placement in a concentration camp. The gruesome and touching tale, which begins with the escape boat sinking and being rescued by a fishing boat on route to Sweden, was moving for everyone present. Several thousand Danish Jews chose to flee across the water to Sweden during World War II.

The location of the escape is not random. From the beach, there are only a few kilometres of water separating Denmark from Sweden, and this route was therefore frequently used. From October 1943, Humlebæk brick factory was a central refuge for Jews who fled to Sweden. The many hiding places of the brickworks played a major role when thousands of Jews in searched the fishing villages along the coast to be transported to Sweden. Those who owned the factory and those who worked there risked their own lives to save hundreds of Jewish people who hid in the factory during the war waiting for an opportunity to flee to safety in neutral Sweden.