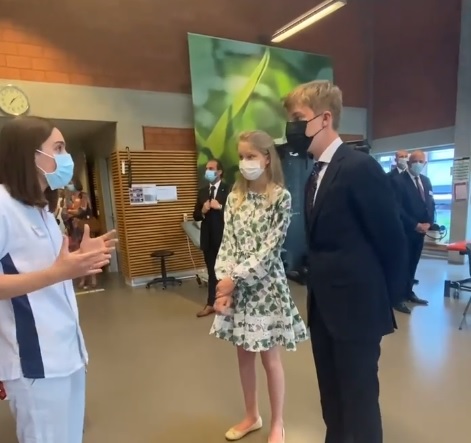 National Day in Belgium has been marked with scaled down celebrations on Wednesday, tinted by a sombre atmosphere.

The King was visibly moved when, during the military parade, images of the damage caused by the devastating floods that have hit Belgium in the past weeks were projected on the giant screens. His Majesty was seen drying tears, touched by the tragedy that has caused the death of 32 people with 18 people still unaccounted for.

King Philippe and Queen Mathilde were also overcome with emotion as they saw their daughter, Princess Elisabeth, parade in front of them as part of her military training.

After the military parade ended, the King and Queen, as well as Prince Gabriel, Prince Emmanuel and Princess Éléonore, departed for Ottignies, in Wallonia, to visit Farra-Clarande, a care home that welcomes adults with severe or profound disabilities. The home is situated in the middle of a park, meaning residents and their families have plenty of access to fresh air and the opportunity for many different activities, including music and swimming.

King Philippe and Queen Mathilde also thanked the staff at both care homes for their outstanding work during such trying times. Both facilities had to restrict access from outside visitors because of the health risk for the patients, and that meant extremely tiring workloads for all the staff.

The visits must no doubt feel very close to Their Majesties’s hearts, since both the King and Queen have long been involved in supporting people with disabilities or rare diseases. Both have focused on ensuring everyone has access to better care and more inclusion in society.

This National Day events were reduced in scale, both because of the floods and the ongoing pandemic.