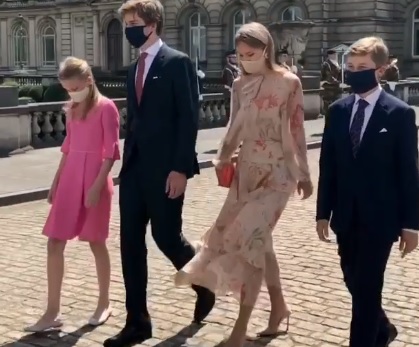 The Belgian Royal Family took advantage of a car-free Sunday to take out their bikes and cycle through the town of Gent.

In many cities throughout Belgium, Sunday 19 September 2021 marked the end of infrastructure week and was celebrated by a car-free day, to which many municipalities adhered.

To celebrate the occasion, which promotes alternative ways of transport that have less impact on the environment, King Philippe, Queen Mathilde and their children took out their bicycles and went for a ride through the streets of Gand, the capital of the East Flanders Province.

This is an activity that the Royal Family rarely misses out on. Except for 2020, when the gathering of people on bicycles was discouraged to preserve health safety, the Belgian royals have always taken part in this day, with Gand (which is the French version of the Dutch Gent) being one of their favourite destinations.

King Philippe and Queen Mathilde were accompanied by three of their four children, Princess Elisabeth, Prince Emmanuel and Princess Eléonore.

Prince Gabriel, their second child, was not present for the day, possibly because he is already in the United Kingdom, where he is enrolled in a one-year pre-university STEM program at The National Mathematics and Science College. The institution is located in Warwickshire, England, and His Royal Highness will be studying Mathematics, Further Mathematics and Physics as his A-level subjects.

Princess Elisabeth, the heir to the throne, is also set to leave Belgium for the United Kingdom, where she is enrolled in a three-year program in history and politics at Lincoln College, University of Oxford. The University’s website reports that their first term for the year will begin on Sunday, the 10th of October.

The Belgian Royal Family has always promoted activities that connect more than one of the causes they believe in. In this instance, a bike ride of car-free Sunday unites the benefits of physical activity, the promotion of tourism in Belgium and the focus on environmental issues.