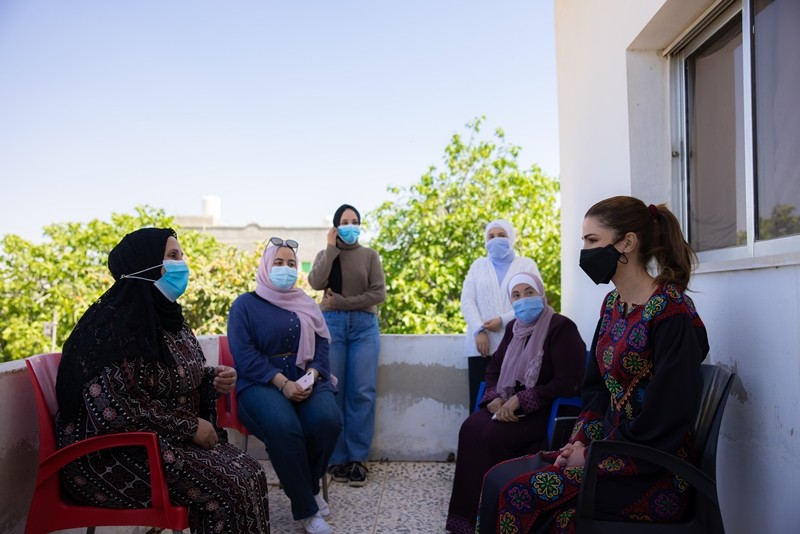 Queen Rania of Jordan visited the Al Yusra Women Charity Society on Monday in Madaba. The Queen paid the visit to learn more about women’s economic empowerment programmes and to see how they are helping improve local families’ livelihoods.

Her Majesty spoke to the board of directors, including Society President, Ibtisam Al Shu’ara, who informed her about their work and empowerment projects. Additionally, the impact the COVID-19 pandemic has had on the charity was also discussed.

The Queen also met with other members of the society outside where everyone could safely socially distance due to the ongoing health crisis; all took precautions and wore masks during the visit. She learned what could be done to enhance their projects with a special emphasis on medicinal home remedies.

Later on Instagram, Queen Rania spoke about her Monday engagement, writing: “Today I met with members of Al Yusra Women Charity Society in Madaba’s Faisaliah village. We had an engaging conversation about their aspirations and efforts to empower local women.”

In 2017, the charity received support from the Royal Hashemite Court and Jordan River Foundation in the form of a revolving fund to support their work in supporting income-generating projects of local women.

According to Her Majesty’s Office, the Al Yusra Women Charity Society was created in 2009 as a multidisciplinary organisation. “The society also provides support to orphans and community members with disabilities, as well as grants to underprivileged families for income-generating projects,” Queen Rania’s Office explained.

This was the first public engagement for Queen Rania since Ramadan began earlier this month.