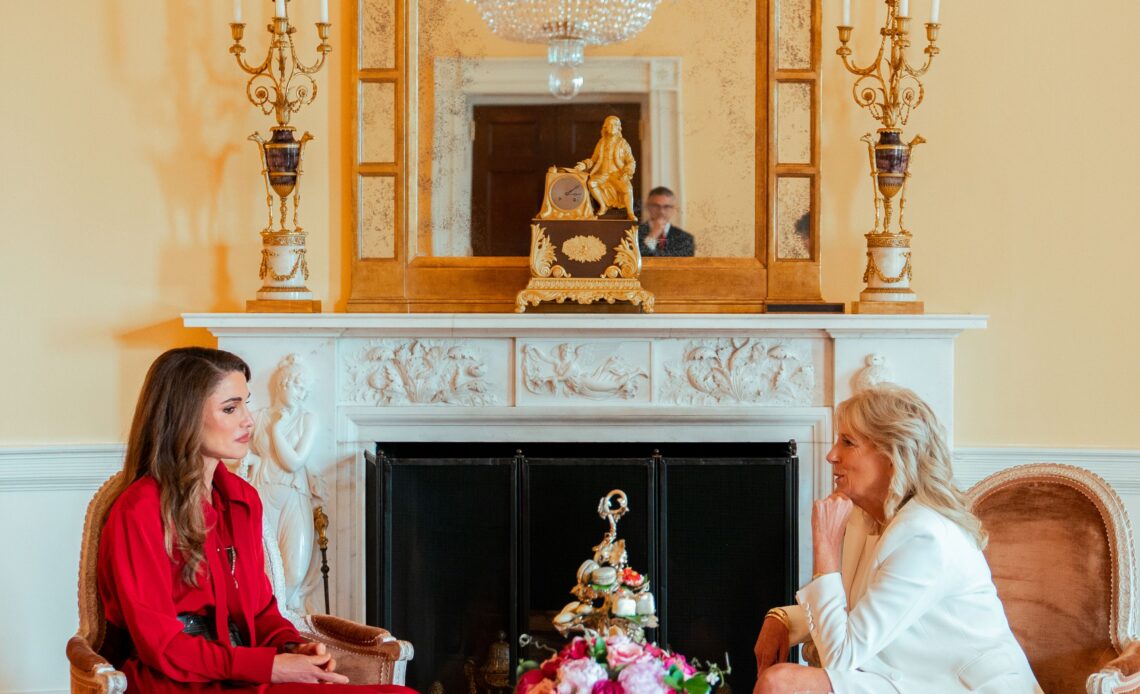 Queen Rania Al Abdullah of Jordan met with US First Lady Jill Biden on Monday evening at the White House; it was the first meeting between the two women since Mrs Biden became First Lady of the United States in January.

After her meeting with Dr Biden, Queen Rania said on Instagram: “It was lovely joining U.S. First Lady Dr Jill Biden at the White House today. Her enthusiasm, warmth, and compassion are a pleasure to behold!”

Her Majesty’s Office said the two women discussed “various issues of common interest.” Both women are passionate about education as the First Lady is an educator, while the Queen has made education one of her most important focuses since becoming Queen consort.

Queen Rania has accompanied her husband, King Abdullah, and son, Crown Prince Hussein, on a working visit to Washington D.C. While the Queen met Mrs Biden, the King and Crown Prince were in the Oval Office for talks with President Joe Biden.

After the meeting, King Abdullah tweeted, “It was a great pleasure to meet again with my dear friend President Biden. We had excellent talks on strengthening our historical partnership. Thank you [President Biden] for your friendship and support. I look forward to building on our joint efforts for peace, stability and prosperity.”

Crown Prince Hussein also posted an Instagram photo from the meeting saying that their discussions reaffirmed “the warm and deep-rooted ties between Jordan and the United States.”

Ahead of the meeting, the White House said: “President Biden looks forward to working with His Majesty to strengthen bilateral cooperation on multiple political, security, and economic issues, including the promotion of economic opportunities that will be vital for a bright future in Jordan.”

This was the King and Crown Prince’s first meeting with President Biden since he took office in January. He met with Biden’s predecessor, President Donald Trump, in 2017 and 2018.