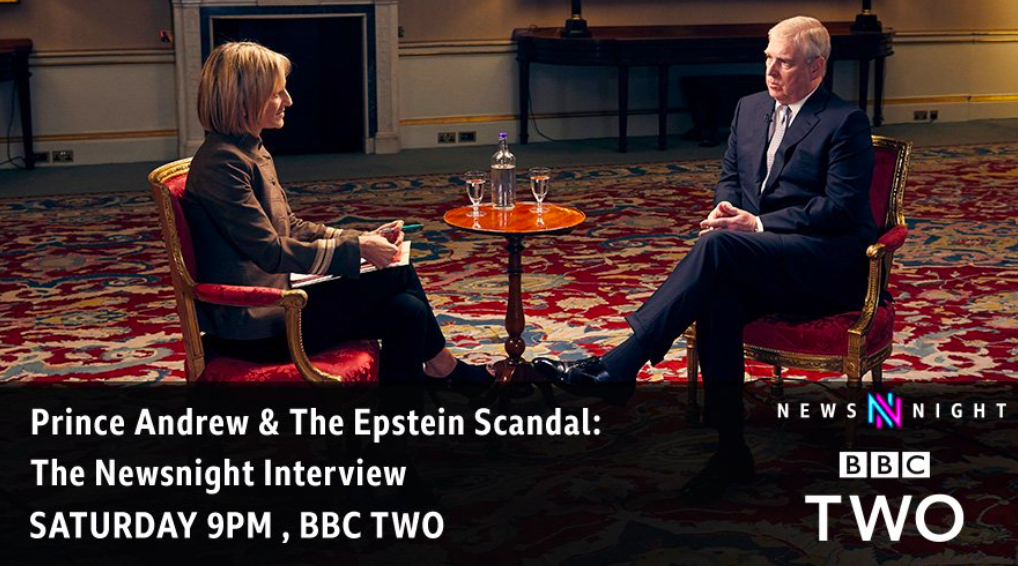 We have only heard a fraction of what he’s going to say but already the interview given by the Duke of York to BBC Two’s Newsnight programme is dominated UK papers. Prince Andrew’s comment, that he ”let the side down” when he stayed at the home of convicted sex offender Jeffrey Epstein, is on the front pages of the majority of Britain’s tabloids and broadsheets.

The remarks, contained in a short clip of the interview and released ahead of the full broadcast, are shown alongside images of the prince talking to BBC presenter Emily Maitlis who secured the scoop after months of negotiation with Buckingham Palace.

In the interview, the duke tells Emily Maitlis that ”The problem was the fact that once he [Epstein] had been convicted, I stayed with him and that’s…that’s…that’s the bit that…that…that, as it were, I kick myself for on a daily basis because it was not something that was becoming of a member of the royal family and we try and uphold the highest standards and practices and I let the side down, simple as that.”

That last line has been picked up by nearly every British paper. The Times has as its headline ”Duke: I let the side down” while the Daily Telegraph goes for ”Andrew: I let the side down” with a second lead in highlighting Emily Maitlis’ question ”Did you sleep with Virginia Roberts?” and the prince’s response ”I have no recollection of meeting this lady”. The ‘I Weekend’ has on its front page ”Prince: I’ve let down my family”.

The Daily Star, the Guardian and the Financial Times don’t feature the story on their front pages.

The exclusive BBC Two Newsnight interview by Emily Maitlis will be broadcast in the UK on Saturday, November 16th 2019. It will be shown on BBC Two at 9pm.