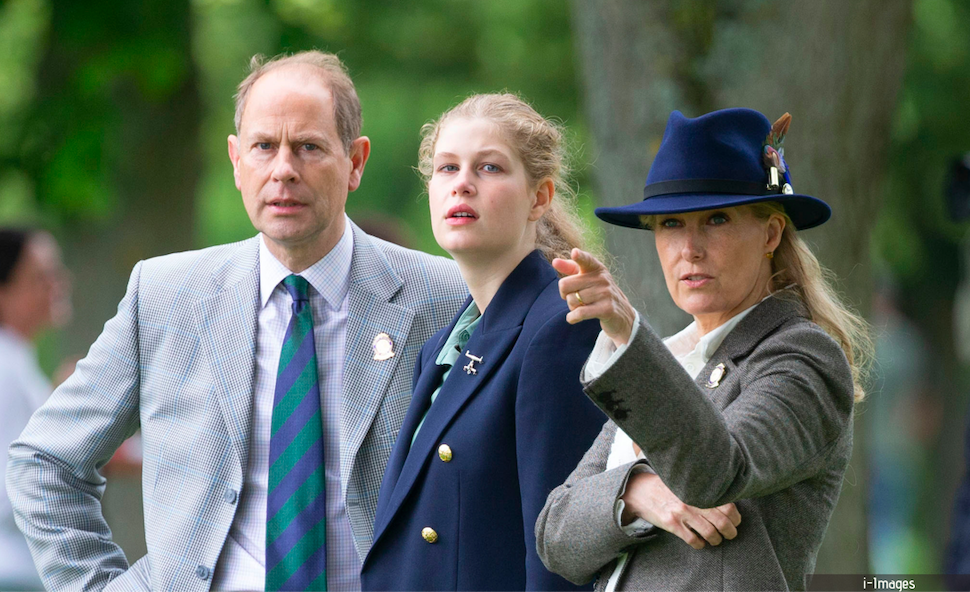 As one of the hardest working couples in the British Royal Family, the Earl and Countess of Wessex have had a very busy 2021. There were several significant family events, as well as countless engagements where they represented The Queen. Edward and Sophie regularly carry out engagements, while their children, Lady Louise Windsor and James, Viscount Severn do not.

As much of the United Kingdom was still in lockdown, January was a quieter month for the Wessexes. On 27 January, Edward and Sophie – known as the Earl and Countess of Forfar in Scotland – virtually visited Forfar and met with several NHS workers serving in Forfar, as well several other organisations, including Guide Dogs and Police Scotland.

At the beginning of February, Sophie had an online engagement for a charity close to her heart, the Royal National Institute for Blind People. She took part in a virtual art night. Her daughter was born with strabismus, a condition that can prevent you from aligning both eyes at the same time; it was corrected by 2013. However, the Countess has continued to support eye-health and blindness-related charities. At the end of the month, Sophie also presented the Queen Elizabeth II British Design Award to Priya Ahluwalia during London Fashion Week.

The Wessexes took part in the annual Commonwealth Day celebration, with Sophie taking part in a digital panel led by TV presented by June Sarpong. The panel focused on the importance of female leadership across the Commonwealth in all communities and the need to support young women so that they can take these roles. She also highlighted how important digital communication has become and that it can make a significant difference in connecting people who would be otherwise struggling.

Like the rest of the British Royal Family, the Wessexes went into mourning for the death of the Duke of Edinburgh. Lady Louise was particularly close with her grandfather and attended a service at All Souls Chapel at Windsor two days after his death. When speaking with the media after the visit, Prince Edward commented on how much of a shock his father’s death was and how meaningful tributes to his father were.  Both Louise and James attended their grandfather’s funeral at Windsor with their parents; due to restrictions at the time, the funeral was limited to only 30 mourners.

On 12 May, the couple marked International Nurses Day by visiting Frimley Park Hospital in Camberley. They met with nurses on-site, as well as other staff virtually. Later in the month, Sophie played wheelchair basketball at an event with British Wheelchair Basketball to launch a new program, Inspire a Generation.

In June, questions as to the Edinburgh title were raised again. The couple gave an interview to Camilla Tominey at The Daily Telegraph, where they discussed their family, the late Duke of Edinburgh, and the future of the dukedom. It has been known that Prince Edward would one day receive the Edinburgh title; his elder brother, the Prince of Wales, currently holds it as he inherited it upon their father’s death, but it will merge with the Crown when he ascends the throne when it can then be given out again. However, questions were raised on whether or not Charles will actually give the title to his brother. Edward and Sophie have done an incredible job of supporting The Queen for years but receive little public recognition; many royal watchers believe that the couple is owed the title.

They continued with a royal tradition of attending Royal Ascot, taking in the races on different days.

Sophie took part in a tandem bicycle ride with the Vision Foundation at Bushy Park. She also did a rare engagement with Princess Alexandra of Kent; The Countess is taking over as royal patron of Guide Dogs, a UK charity that helps train guide dogs.

August was a quiet month for the Wessexes; like most of the British Royal Family, they take their vacation in August, including visiting The Queen at Balmoral.

With several other members of the Royal Family, Edward and Sophie attended Flora Ogilvy Timothy Vesterberg’s wedding at St. James’s Palace on 10 September. After marrying in 2020, the couple held a public ceremony to celebrate with friends and family. Closer to the end of the month, they visited the Autumn RHS Chelsea Flower Show.

The Earl had an engagement with his mother in October. The Queen is Patron, and The Earl is Vice-Patron of the Commonwealth Games Federation; on 7 October, they attended the Baton relay at Buckingham Palace for the Birmingham 2022 Commonwealth Games.

In October, The Countess attended the Foundation of Light’s Gala Charity Dinner as Patron.

November marked another significant milestone for the Wessex family. On 8 November, Lady Louise turned 18. Her mother had said in an earlier 2021 interview that there was the possibility of her taking up her title of Princess, but as of December 2021, Louise has not publicly changed her styling.

At the National Service of Remembrance on Sunday, 14 November, Prince Edward laid a wreath at the base of the Cenotaph. Shortly after that, he represented The Queen at the General Synod of the Church of England and gave her address for her.

The family has kept up their festive spirit for December. On 1 December, Sophie attended an engagement at the Disability Initiative in Camberley ahead of the United Nations International Day of Persons with a Disability on 3 December. She participated in different activities, including creative wreaths and Christmas-themed sculptures.

Sophie also attended the Duchess of Cambridge’s Together At Christmas Community Carol Service, held to thank people across the United Kingdom for their work and support during the global health crisis.

Unfortunately, The Queen was forced to cancel her larger Christmas lunch for the extended Royal Family and will not be going to Sandringham for the holidays. However, it is thought that she will still see her close family members in smaller groups throughout the holidays at Windsor, including the Wessexes.