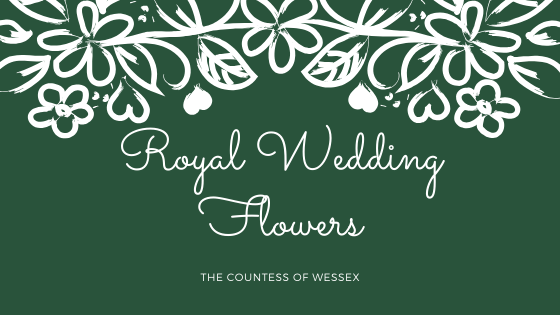 When Sophie Rhys Jones married Prince Edward on June 19th 1999 at St. George’s Chapel, she carried a bouquet with more than a hint of the past about it. The couple who starred in the last big Windsor wedding of the 20th century had gone for something of a medieval theme in the look of their big day and the flowers carried by the bride fitted right in.

From the pageboys and bridesmaids in outfits inspired by the ancient Order of the Garter to the striking pearl jewellery given to the bride by her groom, there were plenty of Plantagenet touches about this royal wedding. And the Countess of Wessex’s wedding bouquet, a medium sized arrangement in a cascade style, reflected those designs.

Sophie’s bouquet was a mix of some of the most popular flowers used by brides for their big day. The creamy blooms included garden roses, stephanotis, freesias and lily of the valley. But the star flower in this arrangement is the calla lily which nestles at the heart of the bouquet and remains its most striking feature. Surrounding the blooms is trailing greenery including some very deep leaves which reflect the black and white colour scheme used for the bridal party.

As you’d expect from such traditional bridal blooms, all the flowers in Sophie’s bouquet have rather romantic meanings in the language of flowers that was so popular with the Victorians. Lily of the valley, scattered throughout the bouquet in clusters, represents ‘’the return of happiness’’ while the freesias, less easy to spot, signify innocence and friendship. Roses take on different meanings according to their colour with white blooms symbolizing new beginnings as well as purity and innocence. The calla lilies represent beauty.

Sophie’s flowers also have another claim to fame. This is one of the few royal wedding bouquets known to have been kept. A section of the posy was preserved and put in a frame. The Countess of Wessex has said the wedding reminder is on show at her home so all her guests can see it.

From the moment Sophie’s father, Christopher Rhys-Jones, carried this bouquet up the steps of St. George’s Chapel, Windsor for his daughter to the starring role it took in the official wedding portraits, this has always been a striking arrangement. And over twenty years on, it remains so, a royal wedding bouquet that has really stood the test of time.