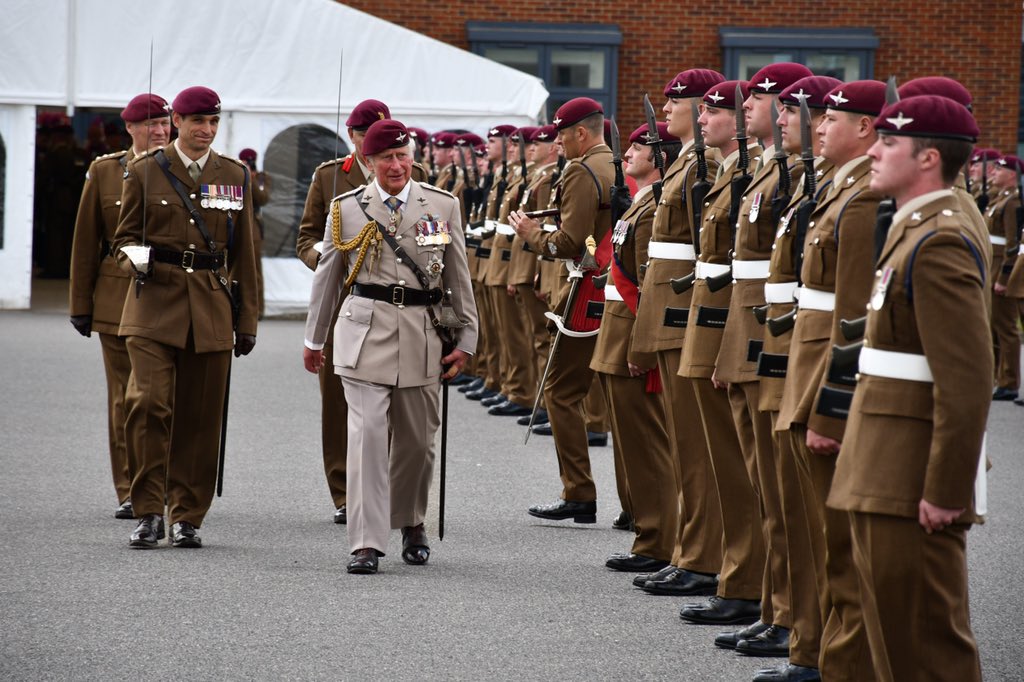 The Prince of Wales presented The Parachute Regiment with new Colours on Tuesday, reflecting on his long history with the regiment and his first parachute drop.

At Merville Barracks in Colchester, Prince Charles, as Colonel in Chief of the Regiment, joined the Colonel Commandant, Lieutenant-General Sir John Lorimer, to inspect the front ranks and watch the 1st, 2nd and 3rd Battalions.

After a presentation of the New Colours, Prince Charles gave a speech and reminisced of his first parachute drop—which took place on 29 July 1971—recalling that he was “initially upside down with my legs in the rigging lines! – into Studland Bay, Dorset, where I was hauled out of the water by the Royal Marines.”

The Prince of Wales paid tribute to the paratroopers, many of whom have been on deployment in major conflict areas, including Kosovo, Sierra Leone, Macedonia, Afghanistan and Iraq.

“As before, I see a generation of Paratroopers that have been tested and not found wanting. For me, it is your exceptional quality, unique ethos, unparalleled determination and selfless commitment that define you. I am enormously proud to be a part of such an extraordinary Regimental family and to share this special day with you.”

He added that the Colours presented on behalf of The Queen “continue to symbolise your loyalty and distinguished pedigree, of which you can all be justifiably proud,” before concluding his speech:

“Soon, you will march off the square and will parade with your new Colours for at least the next twenty years. Whether I shall still be around to present you with new Colours when the time comes remains to be seen, but I look forward to what the future brings you. There will be challenges, and you will meet them as you always have done, with the same grit, determination and care for each other that were the hallmarks of your founding fathers in World War Two. Utrinque Paratus!”

Afterwards, Prince Charles watched a flypast and display by The Red Devils before meeting the team of jumpers. Later, he attended a reception with veterans, serving officers and soldiers, and their families.

Prince Charles became Colonel in Chief of The Parachute Regiment in 1977 and joined in a Parachute Training Course the following year at RAF Brize Norton. The Regiment itself was formed in 1942 and earned its nickname of ‘The Red Devils’ from German soldiers in North Africa.