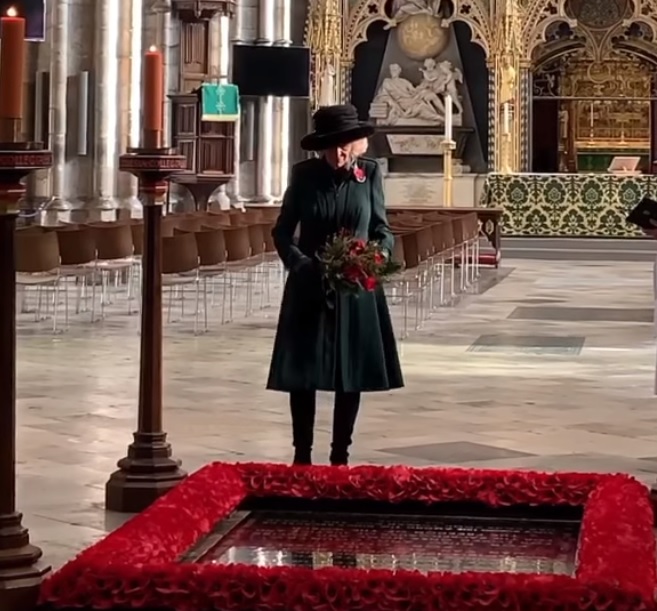 Following in the steps of the late Duke of Edinburgh, the Duchess of Cornwall made a poignant Remembrance tribute at the Grave of the Unknown Warrior.

Inside Westminster Abbey in London, the Duchess laid a wreath at the Grave of the Unknown Warrior to mark Armistice Day, the day the Allied powers signed a ceasefire agreement with Germany in France on 11 November 1918. This agreement would officially bring World War I to a close. At Thursday’s event, former sailors, soldiers, airmen, and marines fell silent for two minutes at eleven. Marking the moment the Last Post was sounded by a bugler.

The Duchess observed the tradition which the Duke of Edinburgh started. He was known to use Remembrance Day to regularly lay a wreath on the memorial. The Duchess was also given the task of placing a wooden memorial cross for the opening of the Field of Remembrance in the garden of Westminster Abbey.

The Duchess took the time to speak with veterans who were present including Arthur Barty who served as The Queen Mother’s driver for 27 years until her death in 2002. Representing a plot for his former unit the Black Watch, Barty said: “It’s vital we keep this tradition alive of commemorating the fallen. I came here on Tuesday to make sure everything was in order and our plot looks immaculate.”

The 88-year-old joked with the Duchess: “I asked the duchess if she stopped because she liked the colour of my coat and she said she did.”

The Field of Remembrance, organised by the Poppy Factory, has been held on the grounds of Westminster Abbey since November 1928. The annual event is to commemorate those who have lost their lives in the Armed Forces. Often, members of the Royal Family are seen remembering the fallen at events in the days leading up to Remembrance Sunday.