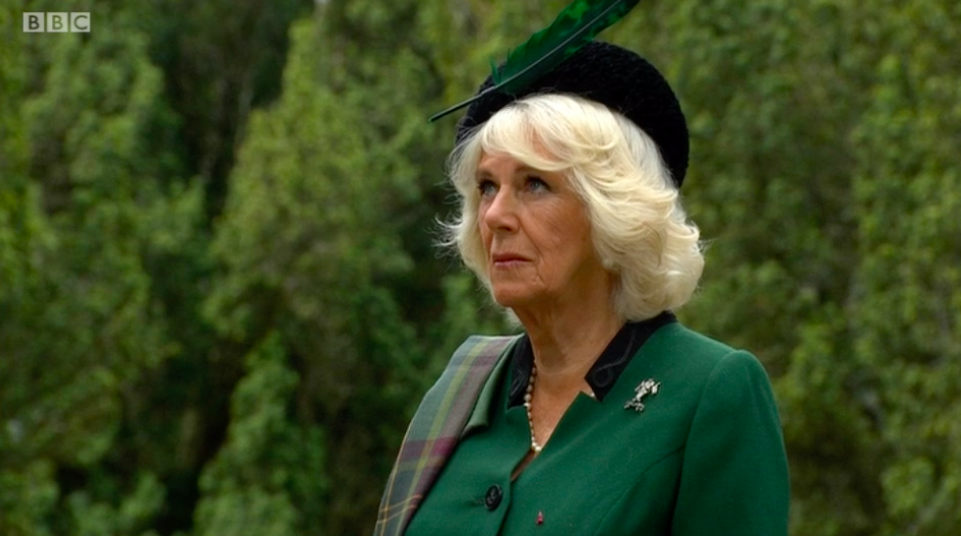 The Duchess of Cornwall led the nation in remembrance for the first time on Friday alongside her husband, the Prince of Wales.

This was one of the most high profile engagements of Camilla’s royal career so far, with the eyes of the nation on the 72-year-old, as she and Prince Charles paid a moving tribute to the fallen on VE Day.

At the Balmoral War Memorial, Her Royal Highness gently placed down a bunch of flowers that she hand-picked personally from her garden at Birkhall.

The Prince of Wales laid a wreath, a duty which he has carried out regularly since 2017 when his mother The Queen stepped back from leading the nation in remembrance on Armistice Day.

For Camilla, however, this was the first time she has held such a prominent role remembrance role.

The Duchess of Cornwall lays flowers at Birkhall as she and Prince Charles lead tributes on #VEDay pic.twitter.com/uuYczxEs6b

On Armistice Day, she usually watches on from a balcony overlooking the Cenotaph alongside The Queen and the Duchess of Cambridge.

But with a hugely scaled-down series of celebrations, Friday was Camilla’s moment to shine, showing what an asset she is to the Royal Family, and indeed the United Kingdom.

The spirit and demeanour of the Duchess when she paid tribute to the fallen shows that when the time comes, she will make an excellent Queen Consort

Dressed in her 4 Rifles dress and a badge from her father’s regiment, Camilla carefully walked up to the war memorial before placing the flowers with a gentle bow of the head.

In a card left at the memorial, Camilla wrote: “In memory of my darling father and all the officers and men of the XII Lancers who fought so bravely to give us peace.”

Laying wreaths can be a difficult task, with commentators watching every move looking for the slightest mistake.

But Camilla does not need to worry about this – she gave a perfect performance.

This felt like a significant moment for Charles and Camilla. In recent years the couple have been holding increasingly important roles as they prepare to step up when Charles one day takes to the throne.

The Queen will have been watching from Windsor, knowing that the future of the monarchy will be safe in the hands of Charles and Camilla.