Barking mad! In a royal first, Camila’s dog unveils a royal plaque as the Duchess of Cornwall Kennels are officially opened 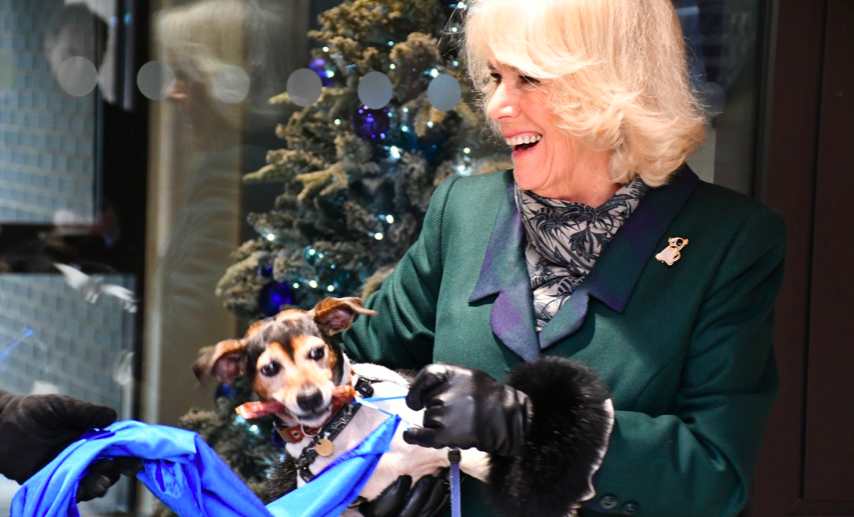 In a royal first, it was the dog who unveiled the plaque to mark the visit instead of the royal family member.

Camilla picked up her Jack Russell Terrier from the ground and walked over to the blue curtain which was covering the plaque.

Beth, who was rescued by Camilla from Battersea a few years ago, pulled the curtain open with her mouth to a round of applause.

The Daily Telegraph’s Roya Nikkhah reports that a hidden sausage might just have helped encourage Beth to make the unveiling.

They say you should never work with animals, but today the Duchess of Cornwall’s rescue dog Beth came up trumps, unveiling a plaque on HRH’s behalf for the new Duchess of Cornwall kennels at the ⁦@Battersea_⁩ in Surrey. A hidden sausage might just have helped… pic.twitter.com/SERRkuMmVT

The Duchess of Cornwall rehomed Beth and another Jack Russell named Bluebell from Battersea Dogs & Cats Home in August 2011 and September 2012 respectively.

Camilla has paid several visits to the animal charity over the years and became Battersea’s Royal Patron in January of this year, in a move that was applauded by the charity’s Chief Executive.

Upon their arrival at Battersea on Wednesday, Camilla and Beth were greeted with a doggy guard of honour.

Her Royal Highnesses then met with the dogs and their handlers, where she discussed the difficulties the charity has faced over the past few months.

The Duchess of Cornwall Kennels, named in honour of Camilla, were built with the generosity of the charity’s donors.