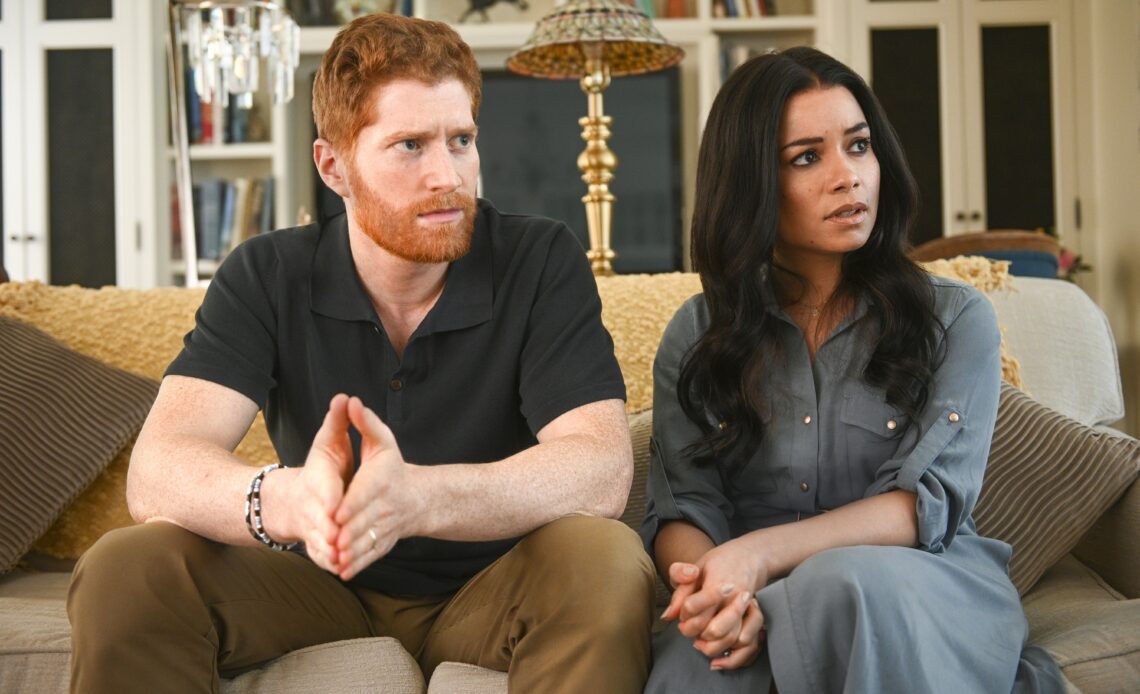 Warning: Spoilers below for Lifetime’s Harry & Meghan: Escaping the Palace.

We’d seen the previews and photo stills from Harry & Meghan: Escaping the Palace, so I knew the first scene was going to be of Meghan in a Diana-like car crash. It was a dream of Harry’s that Meghan was going to die like his mother, and he wakes up to find Meghan and Archie safe. Seeing as this movie aired almost exactly 24 years after Diana’s horrific car crash, this type of scene was tasteless.

It is in no way the Duke or Duchess of Sussex’s fault, and they should not be blamed for it. The writers of the film should be ashamed to use such a scene in this film, but it doesn’t end there. Later on, they have Meghan contemplating throwing herself down the stairs like Diana reportedly did while pregnant with William. Now, we know that Meghan was suicidal during her time as a working royal, and that shouldn’t be left out of the film; however, taking a chance to compare it to Diana (again) shouldn’t have happened.

I will say that the actress that plays Meghan, Sydney Morton, does a phenomenal job of portraying Meghan and sounding like her with Meghan’s unique California accent. From her mannerisms to her voice, Morton really becomes the Duchess.

The warring households goes further than just Cambridges v Sussexes. It is their employees going at it, as well, with “Vicky” in Kensington Palace coming off looking horrible as well as certain extended members of the Royal Family at Trooping. The Duchess of Cambridge comes off in little a better light, appearing to be more sympathetic and supportive to Meghan than William is to Harry. The Prince of Wales is not seen in a good light either, but the movie keeps The Queen primarily out of the drama.

The Queen even has a hard talk with the Duke of Cambridge, asking if he’d welcomed Meghan into the family and what role he had in Harry leaving the Firm. She’s strong in her words about the family and keeping the monarchy.

It makes “Megixt” the brainchild of Harry and shows Meghan as calmer than Harry with the situation. Although most have blamed the Duchess for the exit from the UK, the Duke has since revealed in interviews that he had wanted out of the family since he was in his 20s, so the idea to leave was in his mind before Meghan ever came on the scene.

Now, of course, this is dramatised, so it should not be taken as one hundred per cent factual. It is Lifetime’s idea of what they think happened alongside the information that the Duke and Duchess of Sussex have revealed themselves.

The film was better than I’d anticipated, minus the unnecessary scenes toward the beginning of the film with Diana. I did like the way they ended it with the Oprah interview and flashbacks to Diana’s recordings. To end it with the unveiling of the Diana statue was a nice ending.

How will this film go down? In the UK, I think it goes without saying it will not be liked. The Sussexes poll extremely low in favourability in the UK, and this film won’t do them any favours. However, in the US, I think it will do well. Americans are a bit more sympathetic to the Sussexes, and they are more well-liked here across the pond. Meghan is American, and Americans are defensive of their own. So, I think in the US, it will have positive reviews of Harry & Meghan: Escaping the Palace.