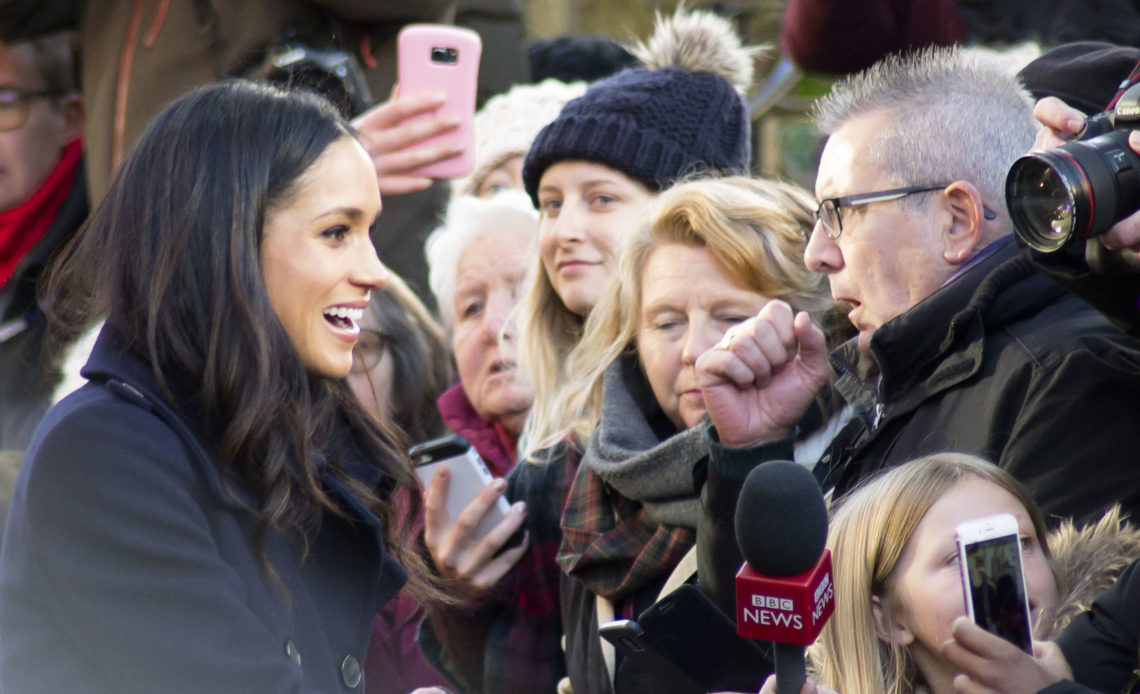 Originally published in March 2018, I’ve since updated this after reading comments and complaints about the Duchess of Sussex attending a baby shower in New York hosted by her friends.

It is something I’ve seen over and over again, people complaining when former American actress Meghan, The Duchess of Sussex, does not abide by all British traditions. Complaints come at every engagement about something “American” that she does whether it be her clothing choices, embracing children and others in hugs or having a baby shower.

Well, guess what? She was born and raised in Los Angeles, California, USA. She spent several years in Toronto, Ontario, Canada. She has traditions of her upbringing and her culture. Who are any of us to tell her to abandon everything from her past and home country? She has a right to hold on to some traditions from home.

You can’t expect her to change how she speaks and the ways she phrases things, especially within a few months or even the first few years. Learning to phrase things and spell the British way when you have spent 36 years writing in American form will be a challenging task. If she chooses to keep writing and spelling like she was taught in school, we can’t blame her. I’m sure her accent will, over time, begin to sound less North American as Autumn Phillips’s has, too. Autumn still has an obvious Canadian accent with just a bit of a British twist.

And so what if she had a baby shower back in New York? Her friends threw it for her; it’s none of our business how much it cost, where it was located, what was given as party favours or that her friend paid for a private jet to take her to and from London. Baby showers are a huge tradition in the US. Her friends, naturally, wanted to give her that experience – even if she is now a member of the British Royal Family.

Complaints have also arisen regarding the colour of her outfits on engagements (with the Daily Mail‘s etiquette expert, William Hanson, leading the charge regarding her outfit choices in general). The future royal has worn black to several events – not uncommon in the winter in North America. On this side of the pond, many wear black and other dark colours during the winter months and not just during times of mourning. It is viewed often here as an elegant and polished choice.

Some have expressed dismay that Meghan wears trousers to engagements instead of the more traditional dresses like the Duchess of Cambridge. No one would bat an eye at that in the United States or Canada. Wearing trousers at official events is a regular occurrence, and you can look no further to the former presidential candidate and Secretary of State, Hillary Clinton who almost always wears pantsuits when out in public. Wearing dresses and coat dresses are rarer in North America.

One person, “1967 Borders” complained on Twitter saying, “Sick of #MeghanMarkle consistently snubbing her nose at Royal protocol and style. Is she so ashamed of her legs she has to wear pants or is it to declare her intent to ‘be her own person’?”

She may feel more comfortable in them when out and about. Maybe this is a portion of American culture that she wants to hold on to? It’s not uncommon to see other royals from across Europe and the Middle East wearing trousers to events, so why are people so against Meghan doing the same?

One “Americanism” that only a handful has found issue with is Meghan being too touchy-feely. Again, I cite Hanson’s article complaining about Meghan hugging children, as well as other members of the Royal Family high-fiving children or taking photos with those during walkabouts. At least in areas of the United States, hugging is a typical form of greeting anyone often even if you are just meeting them. So it is no shock that Meghan has continued that in the UK.

I know what some are thinking, “She’s marrying into the British Royal Family and leaving North America behind. She has to become British!”

Not so fast. Queen Máxima of the Netherlands was born and raised in Argentina. The Dutch didn’t expect her to toss her culture out the window. She even said that she was Latin and wasn’t going to change some aspects of her from her culture (like her love of music and dance). Upon marrying the then Prince of Orange, Willem-Alexander, she said: “I am Latin, and I will continue being Latin in respect to some aspects of my culture. I dance, I sing, and I will keep on dancing and singing.”

What about Crown Princess Mary and Princess Marie of Denmark, a native Australian and French, respectively. They’ve kept touches of their home countries as their father-in-law, the late Prince Henrik did, as well.

Have the Swedes demanded Princess Madeleine’s American-British husband leave his cultures behind and only follow Swedish traditions? No. And I know the argument people have here too, “But he’s not a royal. He has no title and is a private citizen, so it’s not the same!” I would agree here, but at the same time, he’s still an unofficial part of the Swedish Royal Family. And had he elected to become a royal and renounced his citizenships for Sweden, I highly doubt the Swedes would have pitched such fits about him holding on to how he was raised.

The late Princess Grace, also a former American actress, didn’t kick American to the curb upon becoming the Princess of Monaco. She made sure her culture was visible and a part of her children’s lives. They attended camps and schooling in the US because, as half Americans who were born with US citizenship, it was their culture, too.

It is the same for Archie and any other children of Meghan and Harry. They will be half American no matter what. As Meghan still has her American citizenship, Archie was born as a US citizen. It’s only right and fair that he and any siblings know that part of their culture and has it included it in their lives alongside the important British ones.

Meghan isn’t Wallis Simpson. She’s not the end of the monarchy. She can hold on to her traditions while also adapting to British ones, as well. I believe it is essential that she does hold on to some parts of her upbringing in America. I’m sure that’s how Harry and the Royal Family want it, too.

Editor’s Note: Since this article was re-published in 2019, the Duke and Duchess of Sussex have stepped back as working members of the British Royal Family and now reside in Los Angeles. Our Deputy Editor has updated this piece with her thoughts on the Duchess voting below:

Meghan has recently said she would vote in the upcoming November presidential election. No, it’s not a royal move. However, while it is a historic moment and a break from tradition for a member of the British Royal Family (family members usually abstain from voting and remain politically neutral), it is her right as an American citizen to exercise her 19th Amendment right as women to cast her ballot. She has a right to vote for who she wants to see running her country.