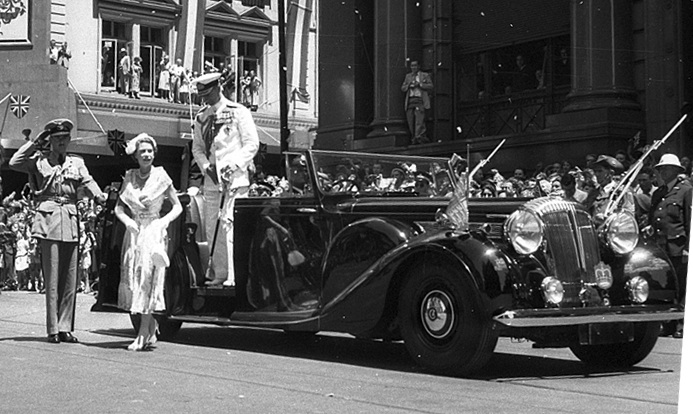 The most epic of royal tours spanned six months, 13 countries, and more than 40,000 miles in an attempt to introduce the new Queen Elizabeth II to the Commonwealth. Taking place five months after Her Majesty’s 1953 coronation, the gruelling tour brought The Queen and Prince Philip to the West Indies, Australasia, Asia and Africa by land, sea, and air.

With so many months of engagements to pore through, there’s a staggering number of outfits to consider, but our team is choosing their favourites from this landmark tour.

Comparing this tour to modern-day royal trips is amazing to think about, both in terms of the length and number of countries visited. This early 1950s era has always appealed to me personally in terms of the ladylike frocks, gloves, and hats, and so many of Her Majesty’s outfits truly stand the test of time, especially in terms of eveningwear.

Bermuda was the first stop on tour, so I chose to start there with the stunning blue fern-print dress she wore upon arriving on the island in November 1953. This is the epitome of fifties style for me, and paired with her signature pearl jewellery, long gloves, a slim belt, and compact handbag, it made a well-turned-out yet approachable first look. The matching feather headpiece is a unique addition to the dress and coordinated with the layered detail of her skirt as well.

My second choice is an easy one: Her Majesty’s coronation gown. She wore this for the opening of Parliament in New Zealand, Australia, and Ceylon (now Sri Lanka) on the tour. The Queen was actually the first reigning monarch to ever visit any of these Commonwealth countries, so her presence was an especially momentous occasion.

It must have felt so special for her to be able to wear that iconic gown again (and who wouldn’t want to get their use out of it?), and paired with the sparkling coronation necklace and earrings, she looked every inch the young, modern monarch. We all love a tiara moment on a tour, and Her Majesty brought out the Vladimir Tiara in Ceylon and Queen Alexandra’s Kokoshnik Tiara in Australia and New Zealand.

The coronation gown carried such an important role on the Commonwealth tour that it had its own cabin on the Royal Yacht Britannia. Lady Pamela Hicks, who served as a lady-in-waiting to The Queen, revealed on the India Hicks podcast that the dress’s cabin was actually larger than her own!

The 1954 Commonwealth tour was important for The Queen. The Commonwealth was less than a decade old at that point, and Her Majesty’s reign had only just begun. I think that these early tours are important when looking at The Queen’s fashion timeline, as she showed a lot of “staples” throughout.

This emerald green day dress and jacket are a striking colour in a silhouette we haven’t seen on Her Majesty in quite some time. The Queen Anne style neckline maintained the expected modesty standards of the time but also perfectly displays The Queen’s pearl necklace. For the 1950s, I would have expected a slightly fuller skirt (á la Dior’s New Look), but it isn’t the slim silhouette she favoured in the late 1940s. I love seeing her matching cocktail hat – given that people still feverishly bet on the colour of The Queen’s hat at Ascot, her hats are always a highlight.

Although it is difficult to find colour photos of this, the dress is featured in Sir William Dargie’s “wattle portrait” of The Queen. Designed by Norman Hartnell, the First Knight of Fashion, the young queen wore the Mimosas gown on the 1954 tour to Australia. Hartnell designed this gown specifically for her tour to Australia- it features sparkling gold wattle motifs on gold tulle. The Queen wore it twice on the tour, to her first evening engagement of the tour in Sydney and to the last in Perth. The portrait is held by the National Museum of Australia.

For Elizabeth II, this tour wasn’t an overseas trip, it was a vital part of her role as Monarch. She came to Australia as its Queen to begin her reign there with a display of duty that endures seven decades on. The clothes she wore were as much an expression of her position as a statement of style. That said, even a Monarch gets a day off, and in February 1954, The Queen attended a garden party in Sydney with a look that meant fashion business. This fitted white lace dress with its cap sleeves, square neck and the mid-length skirt is timeless and would fly off the rails right here and right now if anyone chose to copy it. Add in that rather lovely light hat and the peep-toe sandals that a young Elizabeth II couldn’t be without, and you have a look that is totally timeless.

This two-piece suit is very 50s and a very long way from the kind of outfit we expect The Queen to have worn. It has all the elements of high fashion at the time, from the fitted jacket to the full, flared skirt. It’s rare to see The Queen in a polka dot print, but this is a rather pretty exception to the rule. And, once again, almost seventy years on, this wouldn’t look out of place in a High Street store today.

I’ve always liked the style from the 1950s, and sometimes I think I was born in the wrong decade. As such, it was fun to look back on The Queen’s Commonwealth tour. In January 1954, she was in New Zealand and wore a light coloured dress suit. It fit the traditional 50s fashion to a T and highlighted her small waist. I loved the addition of the multi-strand pearls and loose sleeves.

I also really liked the gown that she wore in Canberra in 1954 for a State Banquet. The gorgeous mimosa gold tulle gown was made by Normal Hartwell (yes the same man who made her wedding gown) and featured gold Australian wattle plant motif designs. Of course, she wore her traditional white gowns and the Girls of Great Britain Tiara.