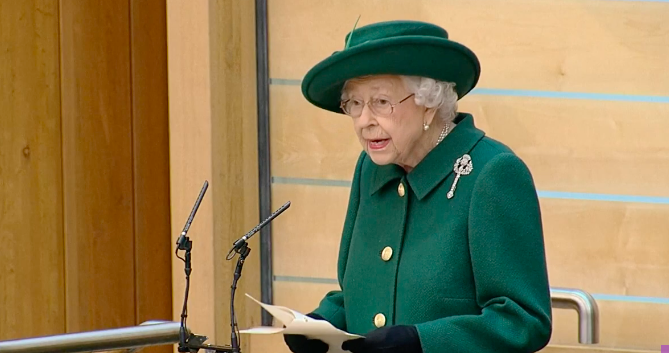 The Queen has officially opened a new session of the Scottish Parliament at Holyrood, with the monarch using the occasion to speak of her “deep affection” for the country.

Joined by the Duke and Duchess of Rothesay, Her Majesty delivered a speech in the debating chamber in the presence of Members of the Scottish Parliament.

The Queen’s speech was written ‘in close cooperation’ with SNP majority-run Scottish government according to Sky News.

The Queen’s Speech in full:

Presiding Officer, First Minister, Members of the Scottish Parliament, it is a pleasure to be invited to address you on this special occasion.

I would like to begin by thanking you, Presiding Officer, for your kind words of welcome.  I would also like to congratulate you, and the Scottish Parliament as a whole, for being able to mark the new session of Parliament in this safe and welcoming manner, during what has been a very trying period.

Presiding Officer, you carry the weighty responsibility of being a strong advocate for the Parliament and I know you will strive to use your judgement to lead this Parliament by demonstrating fairness, respect and impartiality.

Members of the Scottish Parliament, as we all step out from adverse and uncertain times, occasions such as this, today, provide an opportunity for hope and optimism.  Marking this new session does indeed bring a sense of beginning and renewal.  The Scottish Parliament has been at the heart of Scotland’s response to the pandemic with people across this country looking to you for leadership and stewardship, and I hope you will remain at the forefront as we move towards a phase of recovery.

While some of you will have differences of opinion, I trust you will continue to work together.  Your service here is carried out in the presence of the Mace and I encourage you to draw inspiration from the founding principles of Wisdom, Justice, Compassion and Integrity.  These words are a reminder of your responsibilities to the people of Scotland and, in the years ahead, I hope you can reaffirm their importance in everything you do as a Member of this Parliament.

Today is also a day where we can celebrate those who have made an extraordinary contribution to the lives of other people in Scotland, locally or nationally, during the COVID-19 pandemic.  I have spoken before of my deep and abiding affection for this wonderful country, and of the many happy memories Prince Philip and I always held of our time here.  It is often said that it is the people that make a place, and there are few places where this is truer than in Scotland, as we have seen in recent times.

We all know of the difficult circumstances that many people have encountered during the last eighteen months.  However, alongside this, there have been countless examples of resilience and goodwill.  Following my grandson’s time as Lord High Commissioner, Prince William has told me many heartening stories that he heard first hand of people and communities across Scotland uniting to protect and care for those who are isolated or vulnerable.  It is only fitting that we use this occasion to acknowledge and thank these remarkable people, who have made such a positive difference to so many.

Members of the Scottish Parliament, as I said earlier, the beginning of a new session is a time for renewal and fresh thinking, providing an opportunity to look to the future and our future generations.  Next month, I will be attending COP26 events in Glasgow.  The eyes of the world will be on the United Kingdom – and Scotland in particular – as leaders come together to address the challenges of climate change.  There is a key role for the Scottish Parliament, as with all parliaments, to help create a better, healthier future for us all, and to engage with the people they represent, especially our young people.

Presiding Officer, First Minister, Members of the Scottish Parliament, The Duke and Duchess of Rothesay and I will continue to follow your progress with the closest of interest, and we extend to you all our warmest good wishes as you embark on this sixth session of Parliament.