The Queen begins her summer break at Balmoral 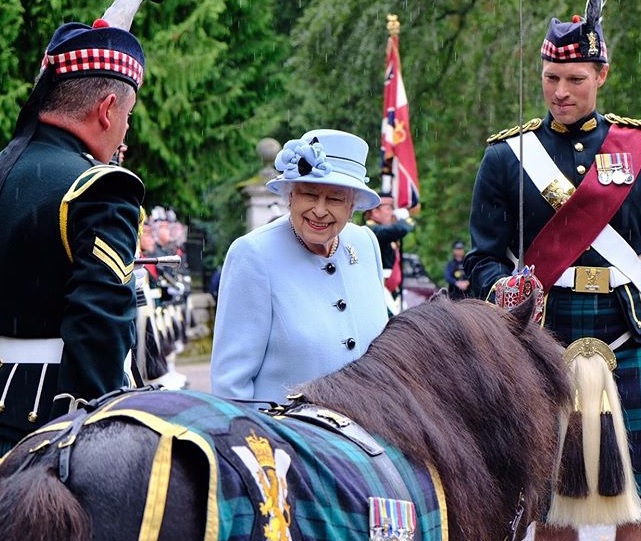 There was a familiar face waiting to greet the Queen as she was given an official welcome at Balmoral Castle at the start of her summer holiday there. And this time round, Corporal Cruachan IV was on best behaviour as he helped get the traditional royal break under way.

Corporal Cruachan IV, the Shetland pony who is the mascot of the Royal Regiment of Scotland, has tried to eat the Queen’s flowers on a previous encounter while he’s also taken a swipe at the Duke of Sussex during another engagement. This time, he was impeccably behaved as he formed part of the official welcoming party. And the Queen, who is Colonel-in-Chief of the Royal Regiment, looked rather pleased to see the mascot again.

Soldiers from 5 Scots formed a Guard of Honour for the Monarch as she made her official arrival at her Scottish retreat. Pipes and drums for the occasion were provided by 4 Scots.

The Queen has spent most of her summer breaks at Balmoral, continuing a royal tradition that goes all the way back to the reign of Queen Victoria. Along with Prince Albert, she commissioned the building of a new castle at Balmoral and work was completed in 1856. Victoria and Albert were great believers in promoting regional industry wherever they could and their new home was made of local granite which was precision cut using the most modern machinery available. The castle was designed by William Smith, the architect for the city of Aberdeen.

The Royal Family usually spends several weeks at Balmoral during the late summer and early autumn. Now the Queen is in residence, it is expected that most of her children and grandchildren will visit her there during the break. It is also traditional for the Prime Minister to spend a weekend there at the invitation of the Monarch. This year, there has been some debate as to whether the new resident of Number 10, Boris Johnson, will arrive alone or with his partner, Carrie Symonds.

In the meantime, the Queen is beginning her holiday which will, as usual, involve picnics in the countryside and long walks. It is said to be a time of year that she treasures – and it means that summer is well and truly under way.