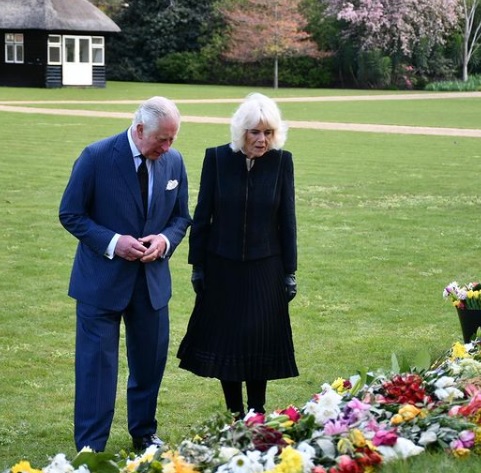 The Prince of Wales appeared emotional as he viewed a collection of the tributes left in memory of his father, the Duke of Edinburgh, at royal residences.

The flowers, cards and mementoes have been gathered up from outside Buckingham Palace and within the Royal Parks and brought to Malborough House Gardens in the capital. Prince Charles, accompanied by the Duchess of Cornwall, visited the grounds on April 15th to see the tributes and read some of the many messages left in memory of the Duke.

Thousands of bouquets and posies have been left for Prince Philip. They are now laid out beneath the flags of the Commonwealth at Marlborough House Gardens.

Among the memorials was a hand painted tile featuring a dove and the message ”a brave and heroic man, gone but never forgotten, we love you”. Many of the cards left with flowers pay tribute to the Duke of Edinburgh’s wartime service as well as his decades of public life and support for the Queen.

The Royal Family had asked people not to leave flowers in memory of the Prince to help ensure crowds didn’t gather at official residences so that coronavirus restrictions are complied with. However, many people have continued to leave tributes. Clarence House said that during the period of National Mourning for Prince Philip, the mementoes would be gathered together and brought to Marlborough House Gardens. An online Book of Condolence remains available for people to leave tributes in via the Royal Family’s official website.

Final preparations are now under way for the Duke of Edinburgh’s funeral which takes place on April 17th at St. George’s Chapel, Windsor. Representatives from the Army, Navy and RAF are among those involved in rehearsals for the service which will be a Ceremonial Royal Funeral.