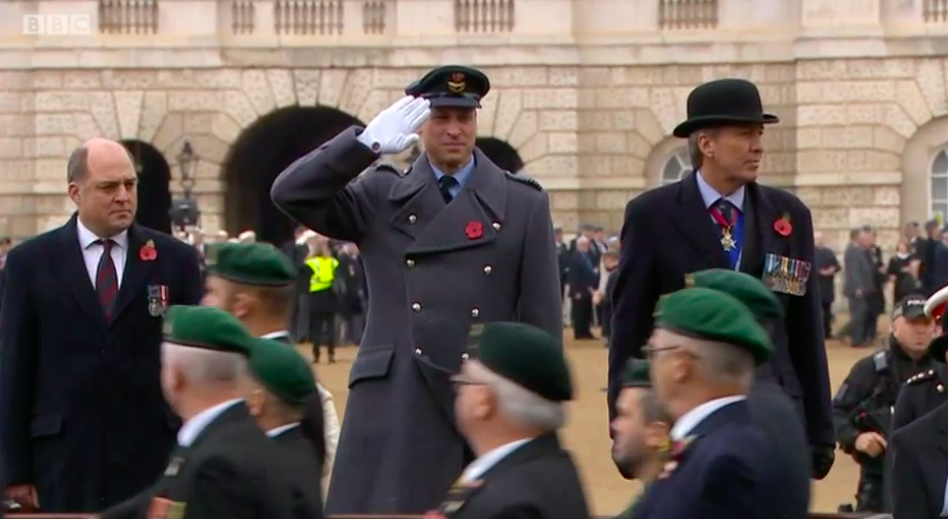 The Duke of Cambridge stepped up to take the salute on Horse Guards Parade on Sunday during the Armistice Day commemorations.

Ben Wallace took the salute alongside the Secretary of State for Defence, Ben Wallace.

Each year, a senior member of The Royal Family takes their position in Horse Guards to salute the parade as they march by.

The royal tasked with the honour rotates on an annual basis.

As there was no parade in 2020, the Duke of York was the last member of The Royal Family to take the salute on Remembrance Sunday in 2019.

Prior to this in 2018, it was the turn of the Princess Royal. Prince William last took the salute in 2015.

Other royals to have taken on the honour include the Earl of Wessex, the Prince of Wales and the late Duke of Edinburgh.

Earlier on Sunday morning, Prince William laid a wreath at the base of the Cenotaph alongside members of his family.

The Prince of Wales was the first person to lay a wreath for The Queen on behalf of the nation.

Prince Charles then laid a wreath on behalf of himself and the Duchess of Cornwall, before Prince William paid his respects.

The Earl of Wessex and the Princess Royal also paid their respects, while an Equerry laid a wreath on behalf of the Duke of Kent who watched on from the Foreign Office balcony.

The Queen missed the annual Remembrance Sunday commemorations at the Cenotaph – only the seventh time she has not been present at the service in her seven-decade reign.

In a statement on Sunday morning, Buckingham Palace said that the 95-year-old monarch had sprained her back forcing her to remain at Windsor Castle to rest.