The Duke and Duchess of Cambridge celebrate their 10th wedding anniversary 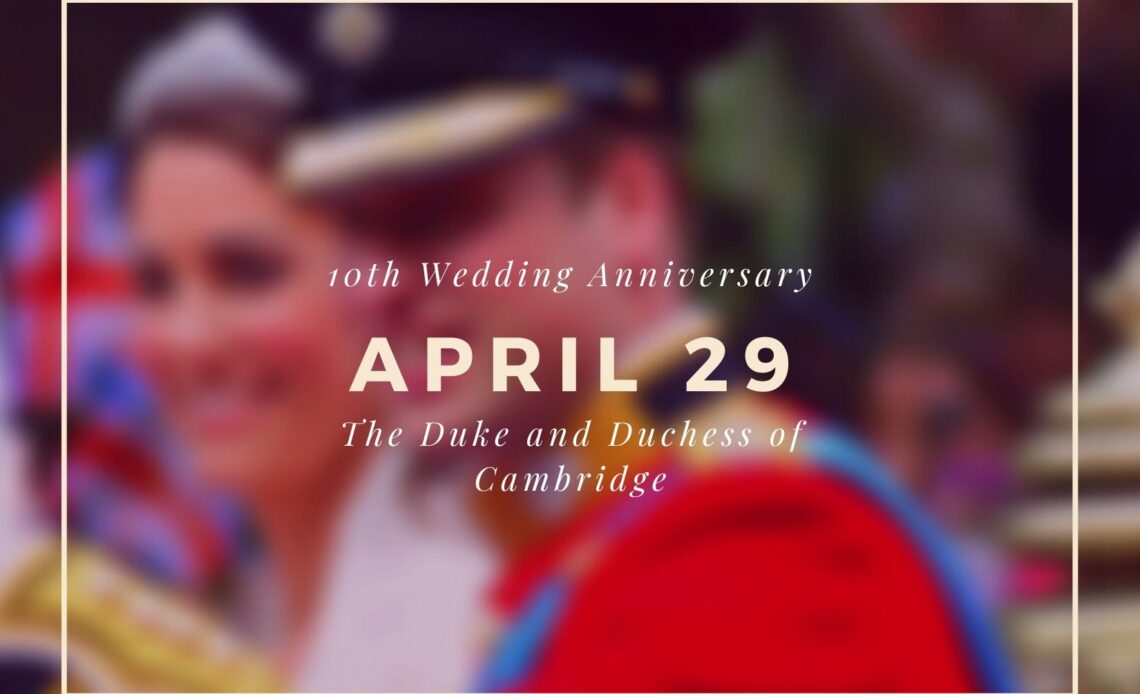 The 29th of April marks the 10th wedding anniversary of the Duke and Duchess of Cambridge. The couple married in a ceremony at Westminster Abbey in London attended by both members of the bride’s and groom’s families. As Prince William was not the heir apparent to the throne, the wedding was not a full state occasion, and many details were left for the couple to decide, including who would make the guest list of 1,900. Others in attendance included members of foreign royal families, diplomats, and other personal guests chosen by the couple.

Following the ceremony, the newlyweds went to Buckingham Palace via a carriage procession. Leaving from Westminster Abbey, the couple travelled past Downing Street, down The Mall, and past Clarence House before arriving at the Palace. The couple then made the traditional appearance on the balcony of Buckingham Palace, where the world watched as they kissed in front of thousands, not just once, but twice.

Following the infamous balcony appearance, The Queen hosted a lunchtime reception at the Palace welcoming guests from the congregation who represent both the couple’s official and private lives. Later in the afternoon, the couple travelled to Clarence House to rest until an evening celebration hosted by the Prince of Wales.

On the morning of the wedding, it was announced William was created Duke of Cambridge, Earl of Strathearn, and Baron Carrickfergus. While Catherine would become Her Royal Highness The Duchess of Cambridge. Strathearn is close to St Andrews, Fife, in Scotland, where the couple met as students. The titles are in line with the practice of granting titles upon marriage to royal princes who did not already have a title. For example, Prince Andrew became the Duke of York when he married in 1986.

The ceremony itself would be broadcast in more than 180 countries. Estimated numbers believe the wedding had a peak audience of 26.3 million viewers, and a total of 36.7 million in the United Kingdom at least watching some part of the coverage. In the United States, the wedding drew an average audience of 22.8 million, with more than 60 million people tuning in at least some point during the coverage.

In celebration of the couple’s wedding anniversary, Royal Central will publish various articles celebrating their milestone anniversary. From in-depth looks into the fashion, flowers and cake to articles highlight how the affair was celebrated worldwide. Make sure to stick with Royal Central as we bring you new and insightful content into one of the biggest weddings of the century.