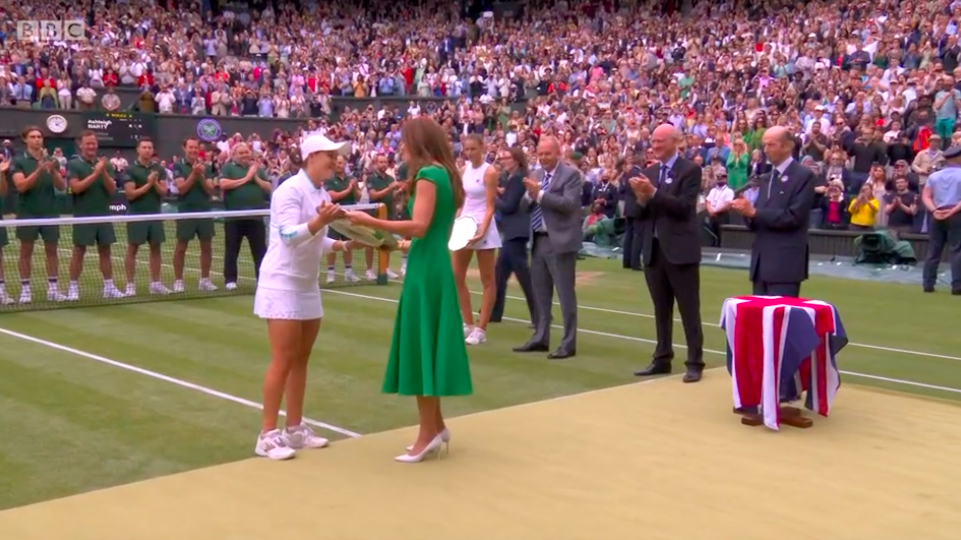 The Duchess of Cambridge presented the Wimbledon trophy to Australian Ashleigh Barty on Saturday afternoon.

Taking the Ladies Singles championship in three sets, Barty defeated Karolína Plíšková to win her first Wimbledon title and becoming the first Australian woman to win the championship since her mentor, Evonne Goolagong, won in 1980.

In an interview ahead of the match, Barty said, “Being able to play on the final Saturday here at Wimbledon is gonna be just the best experience ever!” and said that playing in the championship was a childhood dream come true. Barty is currently ranked first in the world.

Kate, who is Patron of the All England Lawn Tennis and Croquet Club and the Lawn Tennis Association, has been a life-long tennis fan. She regularly attends the tournament and has called it a “quintessential part of the English summer.”

In a BBC interview in 2017, Kate spoke of her love of the sport, saying: “I think it really inspires youngsters, myself, it inspired me, when I was younger, to get involved in the game. It hasn’t changed either, I think that’s what’s so wonderful. You know everyone’s still there in their whites, Wimbledon still looks as amazing as it did as I remember it as a youngster, you’ve got the strawberries and cream. And, you know, every time Wimbledon is on I’m there thinking, ‘Yes, I can do, I can do the same’. Get that racket. Sadly never, never the same results.”

Kate was joined by her husband to watch Barty play Plíšková on Saturday afternoon, and later presented the trophy to her. For the trophy presentation, Kate was joined by the Duke of Kent, Wimbledon’s out-going President, who will present his last trophy at the Men’s Singles championship tomorrow afternoon.

Kate’s appearance at the Wimbledon championship weekend comes after a period of self-isolation following close contact with someone who tested positive for the coronavirus.

The Duchess is due to attend tomorrow’s championship between Novak Djokovic and Matteo Berrettini.