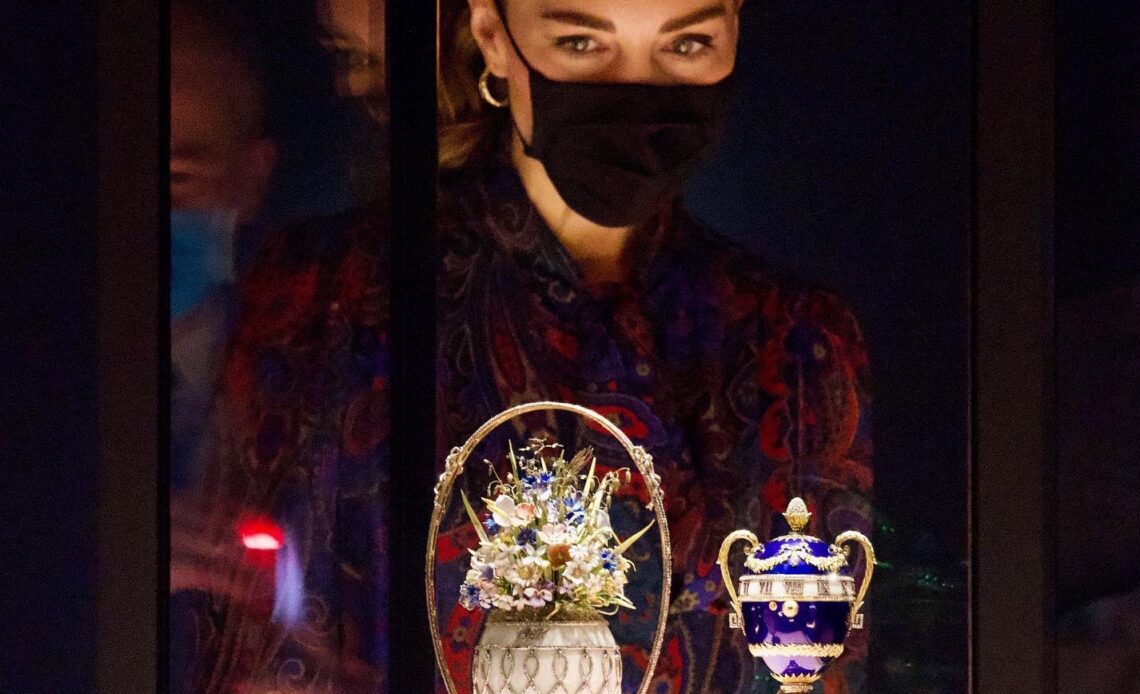 The Duchess of Cambridge has visited the Victoria and Albert Museum in London to see a new exhibition with royal ties.

Catherine visited the V&A on Thursday morning to see Fabergé in London: Romance to Revolution, which recently opened. The exhibition includes over 200 pieces, including three Imperial Easter eggs that have never been seen in the UK before. The Moscow Kremlin Egg, which contains elements of the Dormiton Cathedral at the Kremlin, the Alexander Palace Egg, which contains a miniature of the palace and the Third Imperial Egg, which was lost in 1964 and not found until 2011.

The Queen also lent three eggs from the Royal Collection, the Mosaic Egg, the Colonnade Egg, and the Basket of Flowers Egg.

The Duchess, who has been patron of the museum since May 2018, looked to be thoroughly enjoying herself at the exhibition as she was walked through it by Director Tristan Hunt and Curator Kieran McCarthy.

As reported in Hello!, Catherine was incredibly interested in the pieces. Curator Kieran McCarthy said: “That came through over and over again, just ‘How did they do that? Why does that look like that?’

“There was a lot of why and wherefore in the discussion, which was very interesting because it takes a sophistication to look beyond seeing the spectacle to actually probe into the details, and that was there.”

She was wearing black wide-legged trousers, and a paisley-printed pussy-bow blouse. As face masks are now required again, she had on a black face mask.

The exhibition largely focuses on Fabergé’s popularity in Edwardian England. The first British Fabergé shop opened in London in 1903, and the British Royal Family were loyal customers. Queen Alexandra’s sister, the Dowager Empress of Russia, was a client of the Russian firm and would receive and give many Fabergé pieces as gifts. Fabergé became incredibly popular amongst the interconnected royal families across Europe. Many Fabergé pieces are now held in the Royal Collection.

Fabergé in London: Romance to Revolution opened on 20 November and will run through 8 May 2022. Tickets are £18 and must be booked ahead of visiting.